Mont Orgueil (Jerriais: 'Mount Pride' or 'Haughty Mount') is a castle in Jersey that overlooks the harbour of Gorey. It is also called Gorey Castle by English-speakers, and lé Vièr Châté (the Old Castle) by Jèrriais-speakers. 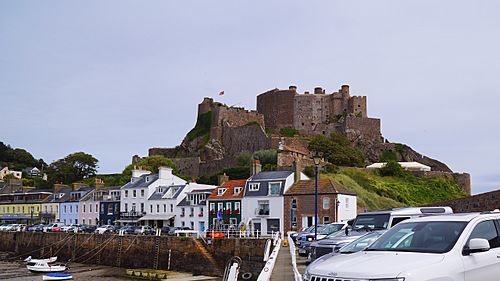 The site had been fortified in the prehistoric period, but the construction of the castle was undertaken following the division of the Duchy of Normandy in 1204. The castle was first mentioned in 1212.

The castle was the primary defence of Jersey until the development of gunpowder which then rendered the castle ultimately indefensible from Mont Saint Nicholas, the adjacent hill which overlooks the castle. Mont Orgueil was updated with platforms for artillery constructed in 1548 and 1549 under the direction of Henry Cornish, Lieutenant of the Earl of Hertford in Jersey. Cornish complained that earlier repairs to the donjon by Robert Raymont had left it so weak it was vulnerable to musket shot; "lyke a nadyl eye scarse abyll to byde a hagboshe." In 1543 he had asked for a "saker" cannon that would cover the sands between "Grovyll" and the castle, where the French had landed in the past.

Mont Orgueil was to be superseded by Elizabeth Castle off Saint Helier, the construction of which commenced at the end of the 16th century. Walter Raleigh, Governor of Jersey in 1600, rejected a plan to demolish the old castle to recycle the stone for the new fortifications with the words: "'twere pity to cast it down". 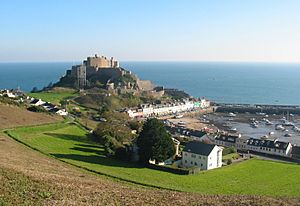 The old castle continued to be used as the island's only prison until the construction of a prison in St. Helier at the end of the 17th century. The English Government found it expedient to send troublesome agitators such as William Prynne and John Lilburne to Mont Orgueil far from the realm of England. The regicides Thomas Waite, Henry Smith, James Temple, Hardress Waller, and Gilbert Millington were transferred to Mont Orgueil in 1661.

During the English Civil War, from March 1643 the then Lieutenant Governor and Bailif of the island, Sir Philippe de Carteret held out for the Royalists in Elizabeth Castle. Leaving his wife Anne de Carteret, and their son Philippe de Carteret to occupy Mont Orgueil. It was from Mont Orgueil that the Royalists under Sir George Carteret retook the island from Parliament in November 1643. In December 1651 the island was invaded by Parliament, however faced with the prospect of modern artillery being deployed on the adjacent hill Mont St. Nicholas, the fortress was surrendered with generous terms allowing those inside to go to Elizabeth Castle.

A report for the States of Jersey in 1691 declared that the barracks accommodation was so dilapidated that it was impossible to quarter troops there. Two years later, the castle was stated to be in a ruinous condition and subsequently was abandoned as a prison, because Elizabeth Castle had been built and the castle was neglected and not needed any more.

Repairs were carried out 1730–1734 and for the rest of the century, parts of the castle were adapted for garrison accommodation. Given full access to the castle from 1795, Admiral Philippe d'Auvergne who was working for the British secret service, to destabilise the French Revolutionary government through an organisation he was running in Brittany and mainland Normandy including the smuggling of people with forged documents and materiel into France together with forged French Assignat notes, which were being mass-produced in London with the successful result of causing hyperinflation which raged in France until 1802. In 1800, the Corbelled Tower was fitted out for use by d'Auvergne as his headquarters.

In 1846, the castle was visited by Queen Victoria and Prince Albert. The castle has also hosted subsequent royal ceremonies to welcome George V in 1921 and Elizabeth II; inscriptions mark the occasions.

Until the second half of the 19th century, the castle was open to the public on one day a year, Easter Monday, and crowds used to flock from all over the island. This is believed to be a survival of the pre-Reformation custom of visiting St. George's Chapel inside the castle on St. George's Day.

In a generally ruinous state at the time of its handover to the people of Jersey by the Crown on 28 June 1907, Mont Orgueil has been managed as a museum site since 1929, although during the Second World War German occupation (1940–1945), the occupying forces garrisoned the castle and added modern fortifications camouflaged to blend in with existing structures.

The heritage site has been managed by the Jersey Heritage Trust since 1994. In the early 21st century, the Trust planned to build a Tudor hall within the castle's keep. Around the same time, a £3 million grant was given to fund restoration work. In 2004, a commemorative Jersey pound note was put into circulation depicting Mont Orgueil. The castle is depicted on the 2010 issue Jersey 50-pound note. On 2 April 2006, after a long building programme, the castle was reopened to the public by the Lieutenant-Governor of Jersey. Restoration work has opened up previously inaccessible areas of the castle to the public. Newly built additions in modern style have enclosed sections of the castle and made them weatherproof, parts of the structure have been reinterpreted, and artistic interventions in the grounds and structure of the castle have provided attractions for visitors.

All content from Kiddle encyclopedia articles (including the article images and facts) can be freely used under Attribution-ShareAlike license, unless stated otherwise. Cite this article:
Mont Orgueil Facts for Kids. Kiddle Encyclopedia.