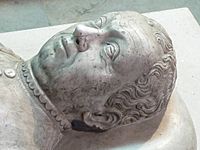 Bertrand du Guesclin (c. 1320 – 13 July 1380), was a French knight from Brittany who fought in the Hundred Years' War. He was Constable of France from 1370 to his death. He was important to the French successes in the war under Charles V of France.

All content from Kiddle encyclopedia articles (including the article images and facts) can be freely used under Attribution-ShareAlike license, unless stated otherwise. Cite this article:
Bertrand du Guesclin Facts for Kids. Kiddle Encyclopedia.