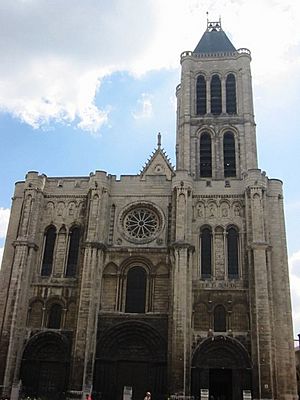 The Basilica is named after Saint Denis. Saint Denis is the patron saint of France. He was also the first Bishop of Paris.

The Basilica was a Romanesque building. In 1136 the Abbot Suger (1081 - 1155) began replacing the building, bit by bit, beginning with the west front and then with a new east end. The east end is said to be the first building in the Gothic style. It was not completed until the 13th century.

People who are buried in Saint Denis Basilica

All content from Kiddle encyclopedia articles (including the article images and facts) can be freely used under Attribution-ShareAlike license, unless stated otherwise. Cite this article:
Basilica of St Denis Facts for Kids. Kiddle Encyclopedia.