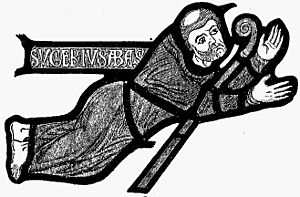 Suger of Saint-Denis on a medieval window

Abbot Suger (c. 1081 – January 13, 1151) was one of the last French abbot-statesmen. He was also a historian and the first patron of Gothic architecture.

Suger was part of a poor family, and in 1091, he was brought to the abbey of Saint-Denis. There he trained and eventually became secretary to the abbot of Saint-Denis in 1104.

He took a trip to Italy, and when he came back, he became the abbot of St-Denis. Until 1127, he worked at the abbey of St-Denis and worked to reform it.

All content from Kiddle encyclopedia articles (including the article images and facts) can be freely used under Attribution-ShareAlike license, unless stated otherwise. Cite this article:
Abbot Suger Facts for Kids. Kiddle Encyclopedia.