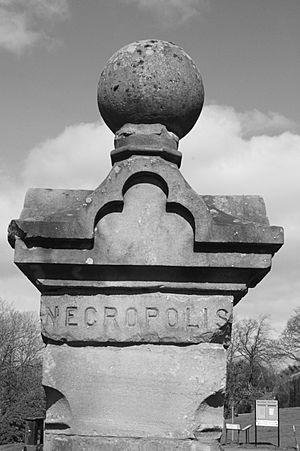 The gatepost at the entrance to the Western Necropolis in Glasgow

A necropolis (plural necropoleis) is a large, designed cemetery with elaborate tomb monuments. The name stems from the Ancient Greek literally meaning "city of the dead".

The term usually implies a separate burial site at a distance from a city, as opposed to tombs within cities, which were common in various places and periods of history. They are different from grave fields, which did not have remains above the ground. While the word is most commonly used for ancient sites, the name was revived in the early 19th century and applied to planned city cemeteries, such as the Glasgow Necropolis.

One of the most famous is in Thebes, Egypt.

All content from Kiddle encyclopedia articles (including the article images and facts) can be freely used under Attribution-ShareAlike license, unless stated otherwise. Cite this article:
Necropolis Facts for Kids. Kiddle Encyclopedia.