Valley of the Kings facts for kids 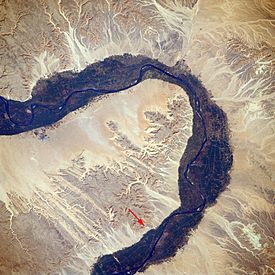 Location of the valley in the Theban Hills, west of the Nile, October 1988 (red arrow shows location)

The Valley of the Kings (Arabic: وادي الملوك‎code: ar is deprecated Wādī al Mulūk) is a valley in Egypt. From the 16th to 11th centuries BC, tombs were built there for the Pharaohs and powerful nobles.

The valley is on the west bank of the Nile across from Luxor. Some of the people buried there are:

The valley is one of the most famous archaeological sites in the world. In 1979 it became a World Heritage Site, with the rest of the Theban Necropolis. Exploration, excavation and conservation continues in the valley, and a new tourist centre has recently been opened.

Panorama of the valley, looking north 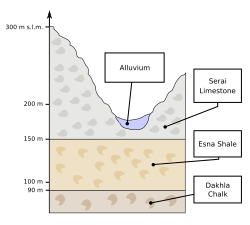 Stratigraphy of the valley

There is little year-round rain in this part of Egypt, but there are rare flash floods that hit the valley. These tons of debris into the open tombs.

All content from Kiddle encyclopedia articles (including the article images and facts) can be freely used under Attribution-ShareAlike license, unless stated otherwise. Cite this article:
Valley of the Kings Facts for Kids. Kiddle Encyclopedia.