Tutankhamun (sometimes called King Tut) was a Pharaoh of Ancient Egypt from about 1334 BC to 1323 BC. He became Pharaoh of the 18th dynasty (royal family) during the New Kingdom at the age of 9.

Tutankhamun is one of the most well known ancient Egyptian kings in modern times. Interestingly, he was not considered to be very important in ancient times and was not recorded on most ancient king lists. However, the discovery of his tomb in 1922 made him a celebrity. While many tombs of the past were robbed, this tomb was left virtually undisturbed. Most of the items buried with Tutankhamun have been well preserved, including thousands of artefacts made from precious metals and rare stones. This is why he has become so popular in modern times. The discovery of this tomb has allowed historians and archaeologists to have a glimpse of what some of the more important kings may have had in their burial chambers before they were robbed. 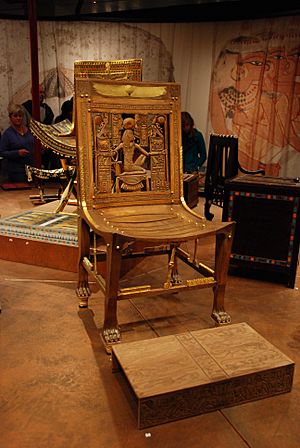 Tutankhamun was the son of Akhenaten. Tutankhamun ruled for 9 years and died very young, at 18, so he is known as The Boy King.

He was married to Ankhesenamun, daughter of Queen Nefertiti, who was his step mother.

Given his age, the king probably had very powerful advisers.

In his third regal year, Tutankhamun reversed several changes made during his father's reign. He ended the worship of the god Aten and restored the god Amun to supremacy. The ban on the cult of Amun was lifted and traditional privileges were restored to its priesthood. The capital was moved back to Thebes and the city of Akhetaten abandoned. This is when he changed his name to Tutankhamun, "Living image of Amun", reinforcing the restoration of Amun.

As part of his restoration, the king initiated building projects, in particular at Karnak in Thebes, where he dedicated a temple to Amun. Many monuments were erected, and an inscription on his tomb door declares the king had "spent his life in fashioning the images of the gods". The traditional festivals were now celebrated again, including those related to the Apis Bull, Horemakhet, and Opet.

The country was economically weak and in turmoil following the reign of Akhenaten. Diplomatic relations with other kingdoms had been neglected, and Tutankhamun sought to restore them, in particular with the Mitanni. Evidence of his success is suggested by the gifts from various countries found in his tomb.

Despite his efforts for improved relations, battles with the Nubians and Asiatics were recorded in his mortuary temple at Thebes. However, since he was young and seemed to require the use of a cane in order to walk, most historians think that he did not personally take part in these battles. 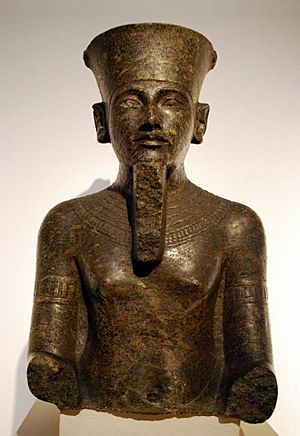 Tutankhamun was thinly built, and roughly 180 cm (5 ft 11 in) tall. Research has showed that Tutankhamun also had "a slightly cleft palate" and possibly a mild case of scoliosis, a medical condition in which the spine deviates to the side from the normal position.

X-rays clearly show that the king suffered from Klippel–Feil syndrome, the fusion of any two of the cervical vertebrae. All seven vertebrae in his neck were completely fused together, so he was unable to move his head. Examination of Tutankhamun's body has also revealed deformations in his left foot, caused by necrosis (poor blood supply) of bone tissue, this may have forced Tutankhamun to walk with the use of a cane, many of which were found in his tomb.

In DNA tests of Tutankhamun's mummy, scientists found DNA from the mosquito-borne parasites that cause malaria. This is currently the oldest known genetic proof of the disease. According to National Geographic, "The malaria would have weakened Tutankhamun's immune system and interfered with the healing of his foot. These factors, combined with the fracture in his left thighbone, may have ultimately been what killed the young king." 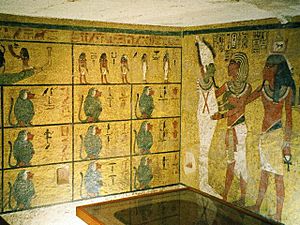 Tomb of Tutankhamun in the Valley of the Kings

There are no surviving records of Tutankhamun's final days. Major studies have been conducted in an effort to establish the cause of death. There is some evidence, that his burial may have been hurried as it was reported that dark brown splotches on the decorated walls of Tutankhamun's burial chamber suggest that he had been entombed even before the paint had a chance to dry.

Recent studies of his body using CT scans and DNA tests, show that he was a very frail person who probably needed a walking stick. Scientists now believe he died from a broken leg, made more complicated by bone disease and malaria. Before this discovery there were many theories about his early death including murder. It is quite certain that he was infected by several strains of malaria, and very likely that he had some genetic defects. 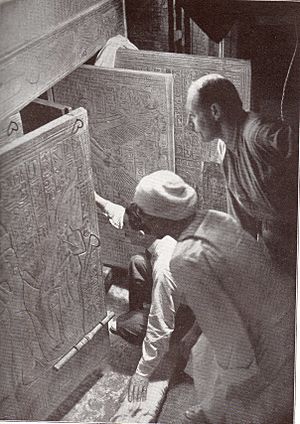 Tutankhamun was buried in a tomb that was unusually small considering his status. His death may have occurred unexpectedly, before the completion of a grander royal tomb, causing his mummy to be buried in a tomb intended for someone else.

Tutankhamun's existence is believed to have been mostly forgotten at some point not too long after his death, until the 20th century. It has been suggested that his tomb was never opened, by either grave robbers or priests, exactly because he and it had been forgotten.

The Egyptologist Howard Carter (employed by Lord Carnarvon) discovered Tutankhamun's tomb on November 4, 1922 near the entrance to the tomb of Ramses VI, thereby setting off a renewed interest in all things Egyptian in the modern world. On November 26 that year both men became the first people to enter Tutankhamun's tomb in over 3000 years. After many weeks of careful excavation, on February 16, 1923 Carter opened the burial chamber and first saw the sarcophagus of Tutankhamun. 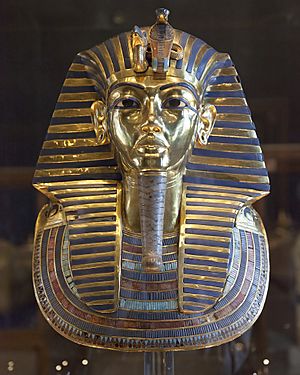 5,398 items were found in the tomb, including a solid gold coffin, face mask, thrones, archery bows, trumpets, a lotus chalice, food, wine, sandals, and fresh linen underwear. Recent analysis suggests a dagger recovered from the tomb had an iron blade made from a meteorite; study of artifacts of the time including other artifacts from Tutankhamun's tomb could provide valuable insights into metalworking technologies around the Mediterranean at the time.

Tutankhamun's mummy still rests in his tomb in the Valley of the Kings. On 4 November 2007, 85 years to the day after Carter's discovery, the 19-year-old pharaoh went on display in his underground tomb at Luxor, when the linen-wrapped mummy was removed from its golden sarcophagus to a climate-controlled glass box. The case was designed to prevent the heightened rate of decomposition caused by the humidity and warmth from tourists visiting the tomb. In January 2019, it was announced that the tomb would re-open to visitors after nine years of restoration.

Tutankhamun was nine years old when he became Pharaoh, and he reigned for about ten years. Tutankhamun is historically significant because his reign was near the rise of Egypt as a world power and because he rejected the radical religious idea's introduced by his predecessor and father, Akhenaten. Secondly, his tomb in the Valley of the Kings was discovered by Carter almost completely intact—the most complete ancient Egyptian royal tomb found.

Kings were venerated after their deaths through cults and associated temples. Tutankhamun was one of the few kings worshiped in this manner during his lifetime. A monument discovered at Karnak and dedicated to Amun-Ra and Tutankhamun indicates that the king could be asked in his deified state for forgiveness and to free the seeker from an ailment caused by sin. Temples of his cult were built as far away as in Kawa and Faras in Nubia. 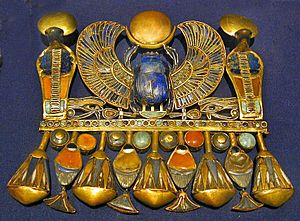 If Tutankhamun is the world's best known pharaoh, it is largely because his tomb is among the best preserved, and his image and associated artifacts the most exhibited. The discoveries in the tomb were prominent news in the 1920s. Tutankhamen came to be called by a modern neologism, "King Tut". "King Tut" became the name of products, businesses, and even the pet dog of U.S. President Herbert Hoover.

Gilded bier from the base of Tutankhamun's sarcophagus

Relics from Tutankhamun's tomb are among the most traveled artifacts in the world. They have been to many countries, but probably the best-known exhibition tour was The Treasures of Tutankhamun tour, which ran from 1972 to 1979. This exhibition was first shown in London at the British Museum. More than 1.6 million visitors saw the exhibition, some queuing for up to eight hours. It remains the most popular exhibition in the Museum's history. The exhibition moved on to many other countries, including the United States, Soviet Union, Japan, France, Canada, and West Germany. The Metropolitan Museum of Art organized the U.S. exhibition, which ran from 17 November 1976 through 15 April 1979. More than eight million attended. 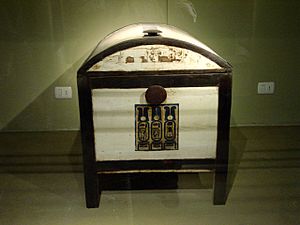 In 2004, the tour of Tutankhamun funerary objects entitled Tutankhamen: The Golden Hereafter, consisting of fifty artifacts from Tutankhamun's tomb. In 2005, Egypt's Supreme Council of Antiquities, in partnership with Arts and Exhibitions International and the National Geographic Society, launched a tour of Tutankhamun treasures and other 18th Dynasty funerary objects, this time called Tutankhamun and the Golden Age of the Pharaohs. In 2011, the exhibition visited Australia for the first time, opening at the Melbourne Museum in April for its only Australian stop before Egypt's treasures returned to Cairo in December 2011.

All content from Kiddle encyclopedia articles (including the article images and facts) can be freely used under Attribution-ShareAlike license, unless stated otherwise. Cite this article:
Tutankhamun Facts for Kids. Kiddle Encyclopedia.