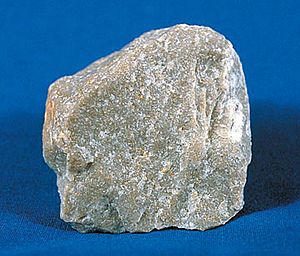 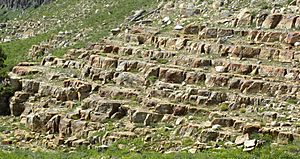 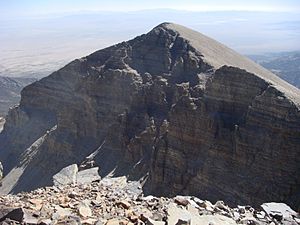 The quartzite of the Prospect Mountain Formation on top of Wheeler Peak, Nevada

Quartzite is a hard metamorphic rock. It is formed when sandstone is squeezed and heated under a chain of mountains.

Although pure quartzite is white, it usually occurs in shades of pink and red. This happens when it contains some iron oxide (Fe2O3). Other colours, such as yellow and orange, are due to other mineral impurities.

When sandstone is changed to quartzite, the individual quartz grains and cement material recrystallizes. Most of the original texture of the sandstone is destroyed by the metamorphism. Minor amounts of cementing materials, iron oxide, silica, carbonate and clay, often move when this is happening. It causes streaks and lens shapes to form in the quartzite.

All content from Kiddle encyclopedia articles (including the article images and facts) can be freely used under Attribution-ShareAlike license, unless stated otherwise. Cite this article:
Quartzite Facts for Kids. Kiddle Encyclopedia.