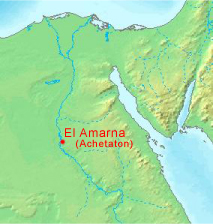 Amarna (Arabic: العمارنة‎code: ar is deprecated al-‘amārnä) is on the east bank of the Nile in the modern Egyptian province of Minya. It is a big archaeological site. It has the remains of the capital city built by the Pharaoh Akhenaten of the late Eighteenth Dynasty (c. 1353 BC), and abandoned shortly afterwards. The Amarna period is the time when Amarna was the capital.

"Amarna" is the Arabic name for the place. The name for the city used by the ancient Egyptians is written as Akhetaten in English. It translates to "the Horizon of the Aten" (Akh-t-Aten).

All content from Kiddle encyclopedia articles (including the article images and facts) can be freely used under Attribution-ShareAlike license, unless stated otherwise. Cite this article:
Amarna Facts for Kids. Kiddle Encyclopedia.