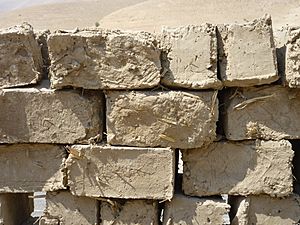 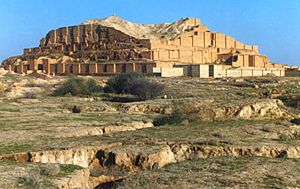 Mudbrick was used for the construction of Elamite ziggurats—some of the world's largest and oldest constructions. Choqa Zanbil, a 13th-century BC ziggurat in Iran, is similarly constructed from clay bricks combined with burnt bricks.

A mudbrick or mud-brick is a brick, made of a mixture of loam, mud, sand and water mixed with a binding material such as rice husks or straw.

In warm regions with very little timber available to fuel a kiln, bricks were generally sun dried. In some cases brickmakers extended the life of mud bricks by putting fired bricks on top or covering them with stucco. 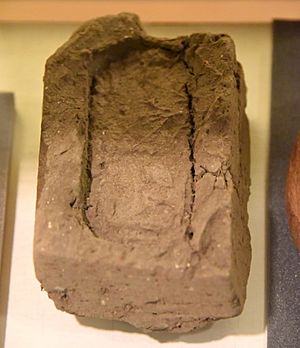 Mud-brick stamped with seal impression of raised relief of the Treasury of the Vizier. From Lahun, Fayum, Egypt. 12th Dynasty. The Petrie Museum of Egyptian Archaeology, London

The South Asian inhabitants of Mehrgarh constructed, and lived in, mud brick houses between 7000–3300 BC. Mud bricks used at more than 15 reported sites in 3rd millennium BC are attributed as major cultural trait in the ancient Indus valley civilization. In the Mature Harappan phase fired mudbricks were used.

Mudbricks were adopted in the Middle East from Indus Valley Cities during the Pre-Pottery Neolithic B period. The Mesopotamians used sun-dried bricks in their city construction; typically these bricks were flat on the bottom and curved on the top, called plano-convex mudbricks.

Some bricks were formed in a square mould and rounded so that the middle was thicker than the ends. In Ancient Egypt, workers gathered mud from the Nile river, and then dug a pit and poured the mud into the pit. Workers then tramped on the mud while straw was added to solidify the mold.

In Minoan Crete at the Knossos site there is archaeological evidence that sun-dried bricks were used in the Neolithic period (e.g. prior to 3400 BC).

Mudbricks were used to some extent in pre-Roman Egypt, and mudbrick use increased at the time of Roman influence.

In areas of Spanish influence, mud-brick construction is called adobe, and developed over time into a complete system of wall protection, flat roofing and finishes which in modern English usage is often referred to as adobe style, regardless of the construction method. 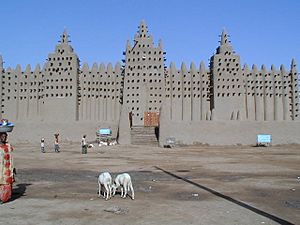 The Great Mosque of Djenné is a well-known Mosque located in Djenné, Mali, and the largest mudbrick structure in the world.

The Great Mosque of Djenné, in central Mali, is the world's largest mudbrick structure. It, like much Sahelian architecture, is built with a mudbrick called Banco, a recipe of mud and grain husks, fermented, and either formed into bricks or applied on surfaces as a plaster like paste in broad strokes. This plaster must be reapplied annually.

All content from Kiddle encyclopedia articles (including the article images and facts) can be freely used under Attribution-ShareAlike license, unless stated otherwise. Cite this article:
Mudbrick Facts for Kids. Kiddle Encyclopedia.