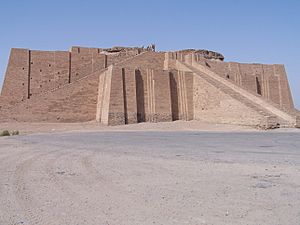 Partially reconstructed facade and access staircase of the Ziggurat of Ur

A ziggurat is a type of massive structure built in ancient Mesopotamia and Iraq. It has the form of a terraced compound of successively receding stories or levels. Notable ziggurats include the Great Ziggurat of Ur near Nasiriyah, the Ziggurat of Aqar Quf near Baghdad, the now destroyed Etemenanki in Babylon, Chogha Zanbil in Khūzestān and Sialk.

Ziggurats were built by ancient Sumerians, Akkadians, Elamites, Eblaites and Babylonians for local religions. Each ziggurat was part of a temple complex that included other buildings. The precursors of the ziggurat were raised platforms that date from the Ubaid period during the sixth millennium. The ziggurats began as a platform (usually oval, rectangular or square), the ziggurat was a mastaba-like structure with a flat top. The sun-baked bricks made up the core of the ziggurat with facings of fired bricks on the outside. Each step was slightly smaller than the step below it. The facings were often glazed in different colors and may have had astrological significance. Kings sometimes had their names engraved on these glazed bricks. The number of floors ranged from two to seven. 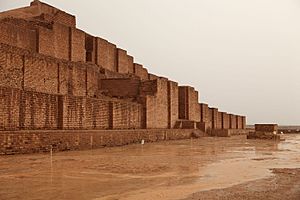 According to archaeologist Harriet Crawford, "It is usually assumed that the ziggurats supported a shrine, though the only evidence for this comes from Herodotus, and physical evidence is nonexistent. It has also been suggested by a number of scholars that this shrine was the scene of the sacred marriage, the central rite of the great new year festival. Herodotus describes the furnishing of the shrine on top of the ziggurat at Babylon and says it contained a great golden couch on which a woman spent the night alone. The god Marduk was also said to come and sleep in his shrine. The likelihood of such a shrine ever being found is remote. Erosion has usually reduced the surviving ziggurats to a fraction of their original height, but textual evidence may yet provide more facts about the purpose of these shrines. In the present state of our knowledge it seems reasonable to adopt as a working hypothesis the suggestion that the ziggurats developed out of the earlier temples on platforms and that small shrines stood on the highest stages..." Access to the shrine would have been by a series of ramps on one side of the ziggurat or by a spiral ramp from base to summit. The Mesopotamian ziggurats were not places for public worship or ceremonies. They were believed to be dwelling places for the gods and each city had its own patron god. Only priests were permitted on the ziggurat or in the rooms at its base, and it was their responsibility to care for the gods and attend to their needs. The priests were very powerful members of Sumerian and Assyro-Babylonian society.

One of the best-preserved ziggurats is Chogha Zanbil in western Iran. The Sialk ziggurat, in Kashan, Iran, is the oldest known ziggurat, dating to the early 3rd millennium BCE. Ziggurat designs ranged from simple bases upon which a temple sat, to marvels of mathematics and construction which spanned several terraced stories and were topped with a temple.

An example of a simple ziggurat is the White Temple of Uruk, in ancient Sumer. The ziggurat itself is the base on which the White Temple is set. Its purpose is to get the temple closer to the heavens, and provide access from the ground to it via steps. The Mesopotamians believed that these pyramids temples connected heaven and earth. In fact, the ziggurat at Babylon was known as Etemenankia or "House of the Platform between Heaven and Earth".

An example of an extensive and massive ziggurat is the Marduk ziggurat, of Etemenanki, of ancient Babylon. Unfortunately, not much of even the base is left of this massive 91-meter tall structure, yet archeological findings and historical accounts put this tower at seven multicolored tiers, topped with a temple of exquisite proportions. The temple is thought to have been painted and maintained an indigo color, matching the tops of the tiers. It is known that there were three staircases leading to the temple, two of which (side flanked) were thought to have only ascended half the ziggurat's height.

Etemenanki, the name for the structure, is Sumerian and means "temple of the foundation of heaven and earth". The date of its original construction is unknown, with suggested dates ranging from the fourteenth to the ninth century BCE, with textual evidence suggesting it existed in the second millennium.

All content from Kiddle encyclopedia articles (including the article images and facts) can be freely used under Attribution-ShareAlike license, unless stated otherwise. Cite this article:
Ziggurat Facts for Kids. Kiddle Encyclopedia.