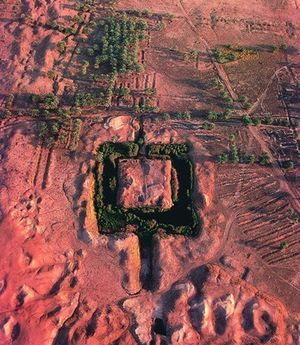 Aerial view of the remains of Etemenanki

Etemenanki (Sumerian: 𒂍𒋼𒀭𒆠 É.TEMEN.AN.KI "temple of the foundation of heaven and earth") was a ziggurat dedicated to Marduk in the ancient city of Babylon. It now exists only in ruins, located about 90 kilometres (56 mi) south of Baghdad, Iraq. Etemenanki has been suggested as a possible inspiration to the biblical story of the Tower of Babel.

The city of Babylon had been destroyed in 689 BC by Sennacherib, and was restored by Nabopolassar and his son Nebuchadnezzar II. It took 88 years to rebuild. Its central feature was the temple of Marduk (Esagila), to which the Etemenanki ziggurat was associated. The seven stories of the zigurrat reached a height of 91 meters, and contained a temple shrine at the top.

Reconstruction of Etemenanki, based on Schmid

The Etemenanki is described in a cuneiform tablet from Uruk from 229 BC, a copy of an older text (now in the Louvre in Paris). It gives the height of the tower as seven stocks (91 meters) with a base of 91 meters square. This was confirmed by excavations conducted by Robert Koldewey after 1913. Large stairs were discovered at the south side of the building, where a triple gate connected the it with the Esagila. A larger gate to the east connected the Etemenanki with the sacred procession road (now reconstructed in the Pergamon museum in Berlin). 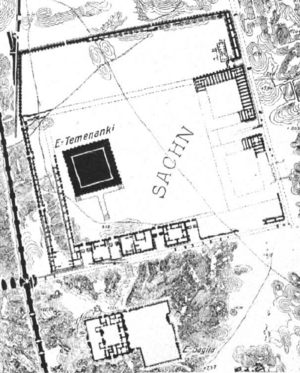 Plan of the site

In 331 BCE, Alexander the Great captured Babylon and ordered repairs to the Etemenanki. When Alexander returned to the ancient city in 323 BCE, he noted that no progress had been made, and ordered his army to demolish the entire building in order to prepare a final rebuilding. His death, however, prevented the reconstruction. The Babylonian Chronicles and Astronomical Diaries record several attempts to rebuild the Etemenanki, which were always preceded by removing the last debris of the original ziggurat. The Ruin of Esagila Chronicle mentions that the Seleucid crown prince Antiochus I decided to rebuild it and made a sacrifice in preparation. However, while there, he stumbled on the rubble and fell. He then angrily ordered his elephant drivers to destroy the last of the remains. There are no later references to the Etemenanki from antiquity.

All content from Kiddle encyclopedia articles (including the article images and facts) can be freely used under Attribution-ShareAlike license, unless stated otherwise. Cite this article:
Etemenanki Facts for Kids. Kiddle Encyclopedia.