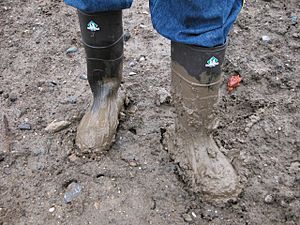 A pair of muddy boots 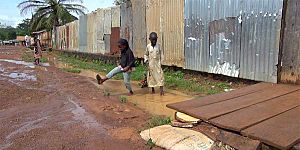 Mud is a liquid or semi-liquid mixture of water and any combination of different kinds of soil (loam, silt, and clay). It usually forms after rainfall or near water sources. Ancient mud deposits harden over geological time to form sedimentary rock such as shale or mudstone (generally called lutites). When geological deposits of mud are formed in estuaries, the resultant layers are termed bay muds. 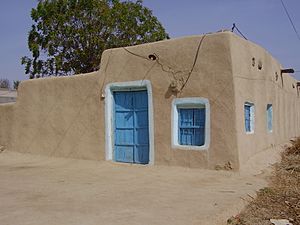 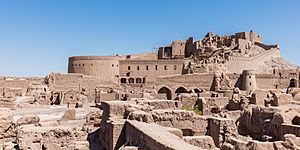 Arg e Bam, One of The largest adobe and mud building in the world.

In the construction industry, mud is a semi-fluid material that can be used to coat, seal, or adhere materials. Depending on the composition of the mud, it can be referred by many different names, including slurry, mortar, plaster, stucco, and concrete.

Mud, cob, adobe, clay, and many other names are historically used synonymously to mean a mixture of subsoil and water possibly with the addition of stones, gravel, straw, lime, and/or bitumen. This material was used a variety of ways to build walls, floors and even roofs. For thousands of years it was common in most parts of the world to build walls using mudbricks or the wattle and daub, rammed earth or cob techniques and cover the surfaces with earthen plaster. 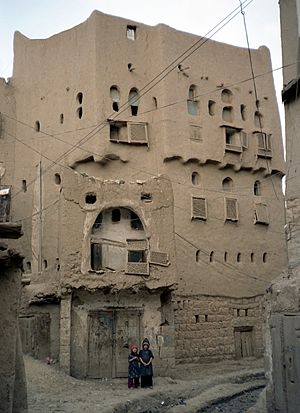 Mud can be made into mud bricks, also called adobe, by mixing mud with water, placing the mixture into moulds and then allowing it to dry in open air. Straw is sometimes used as a binder within the bricks, as it adds a support lattice. When the brick would otherwise break, the straw will redistribute the force throughout the brick, decreasing the chance of breakage. Such buildings must be protected from groundwater, usually by building upon a masonry, fired brick, rock or rubble foundation, and also from wind-driven rain in damp climates, usually by deep roof overhangs. In extremely dry climates a well drained flat roof may be protected with a well-prepared (puddled) and properly maintained dried mud coating, viable as the mud will expand when moistened and so become more water resistant. Adobe mudbricks were commonly used by the Pueblo Indians to build their homes and other necessary structures.

Mud that is mostly clay, or a mixture of clay and sand may be used for ceramics, of which one form is the common fired brick. Fired brick are more durable but consume much more energy to produce.

Stabilized mud (earth, soil) is mud which has had a binder such as cement or bitumen added. Examples are mudcrete, landcrete, and soil cement. 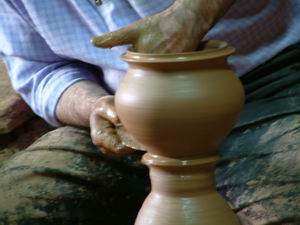 A man shapes pottery as it turns on a wheel. (Cappadocia, Turkey)

Pottery is made by forming a clay body into objects of a required shape and heating them to high temperatures in a kiln which removes all the water from the clay, which induces reactions that lead to permanent changes including increasing their strength and hardening and setting their shape. A clay body can be decorated before or after firing. Prior to some shaping processes, clay must be prepared. Kneading helps to ensure an even moisture content throughout the body. Air trapped within the clay body needs to be removed. This is called de-airing and can be accomplished by a machine called a vacuum pug or manually by wedging. Wedging can also help produce an even moisture content. Once a clay body has been kneaded and de-aired or wedged, it is shaped by a variety of techniques. After shaping it is dried and then fired.

In ceramics, the making of liquid mud (called slip) is a stage in the process of refinement of the materials, since larger particles will settle from the liquid.

Mud can provide a home for numerous types of animals, including varieties of worms, frogs, snails, clams, and crayfish. Other animals, such as hippopotamuses, pigs, rhinoceroses, water buffalo and elephants, bathe in mud in order to cool off and protect themselves from the sun. Submerged mud can be home to larvae of various insects.

Mud plays an important role in the marine ecosystem. The activities of burrowing animals and fish have a dramatic churning effect on muddy seabeds. This allows the exchange and cycling of oxygen, nutrients, and minerals between water and sediment.

Below the surface, the burrows of some species form intricate lattice-like networks and may penetrate a meter or more downwards. This means that the burrowed mud is a productive habitat, providing food and shelter for a wide range of mud-dwellers and other animals that forage in and over the mud. 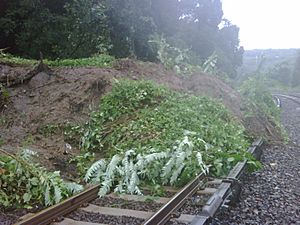 A landslide on a railroad

Mud can pose problems for motor traffic when moisture is present, because every vehicle function that changes direction or speed relies on friction between the tires and the road surface, so a layer of mud on the surface of the road or tires can cause the vehicle to hydroplane.

Mudslides are also common in the western United States during El Niño years due to prolonged rainfall. 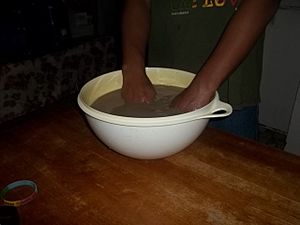 A bowl of kava tea.

There are numerous dysphemisms for poor-tasting food such as "tastes like dirt". Kava tea is often described this way, as it is bitter, brown, and contains sediments.

There also exist children's recipes for "mud", which is generally a chocolate or cornstarch-based sludge used more for visual appeal than actual taste. Never does this confectionery mud actually contain real mud. 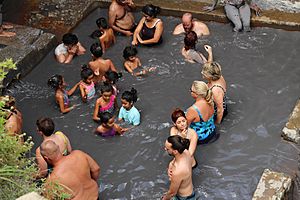 Mud Bathing in the Sulphur Springs at St. Lucia

A mud bath is a bath of mud, commonly from areas where hot spring water can combine with volcanic ash. Mud baths have existed for thousands of years, and can be found now in high-end spas in many countries of the world.

Mud wallows are a common source of entertainment for kids. Mud wallows can be any shape, size, depth and some can have water as well as mud. Usually wallows are shallow dips in the ground that have been flooded and were full of dirt and those two have mixed to make a squishy mud wallow. 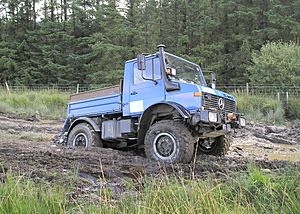 Mud bogging is a form of off-road motorsport popular in Canada and the United States in which the goal is to drive a vehicle through a pit of mud or a track of a set length. Winners are determined by the distance traveled through the pit. However, if several vehicles are able to travel the entire length, the time taken to traverse the pit will determine the winner.

Mud runs are a popular activity involving mud. Participants run a distance of 3 miles to as long as 10 miles, while crawling through mud bogs, and battling other obstacles.

All content from Kiddle encyclopedia articles (including the article images and facts) can be freely used under Attribution-ShareAlike license, unless stated otherwise. Cite this article:
Mud Facts for Kids. Kiddle Encyclopedia.