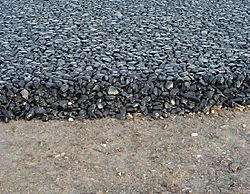 A layer of asphalt concrete paving. 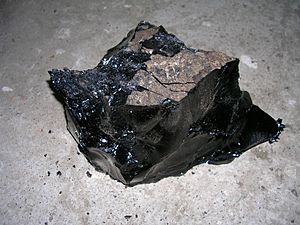 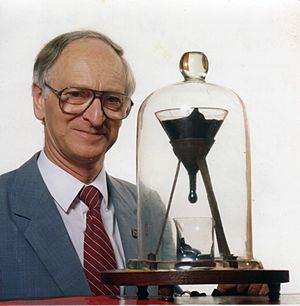 The University of Queensland pitch drop experiment, with Professor John Mainstone. Photo taken in 1990, two years after the seventh drop and 10 years before the eighth drop fell

Asphalt, or bitumen, is a sticky, black and highly viscous liquid or semi-solid, composed almost entirely of petroleum. It is present in most crude petroleums and in some natural deposits. It is the material which made the La Brea tar pits.

Its main use is in road construction. Mixed with "aggregate" (sand, gravel, crushed stone, etc.) it makes a good road surface. It has various other names: pitch, tarmac, blacktop, asphalt concrete, asphalt pavement (US), all mean roughly the same thing.

Although a block of asphalt or pitch can look like a solid, it still flows, but very slowly. There have been a few "pitch experiments" to see how long it takes for a drip to form and drop off a block of apparently solid pitch.

The vast majority of refined asphalt is used in construction: primarily as a constituent of products used in paving and roofing applications. According to the requirements of the end use, asphalt is produced to specification. This is achieved either by refining or blending. It is estimated that the current world use of asphalt is approximately 102 million tonnes per year. Approximately 85% of all the asphalt produced is used as the binder in asphalt concrete for roads. It is also used in other paved areas such as airport runways, car parks and footways. Typically, the production of asphalt concrete involves mixing fine and coarse aggregates such as sand, gravel and crushed rock with asphalt, which acts as the binding agent. Other materials, such as recycled polymers (e.g., rubber tyres), may be added to the asphalt to modify its properties according to the application for which the asphalt is ultimately intended.

A further 10% of global asphalt production is used in roofing applications, where its waterproofing qualities are invaluable. The remaining 5% of asphalt is used mainly for sealing and insulating purposes in a variety of building materials, such as pipe coatings, carpet tile backing and paint. Asphalt is applied in the construction and maintenance of many structures, systems, and components, such as the following:

Roofing shingles account for most of the remaining asphalt consumption. Other uses include cattle sprays, fence-post treatments, and waterproofing for fabrics. Asphalt is used to make Japan black, a lacquer known especially for its use on iron and steel, and it is also used in paint and marker inks by some exterior paint supply companies to increase the weather resistance and permanence of the paint or ink, and to make the color darker. Asphalt is also used to seal some alkaline batteries during the manufacturing process.

All content from Kiddle encyclopedia articles (including the article images and facts) can be freely used under Attribution-ShareAlike license, unless stated otherwise. Cite this article:
Asphalt Facts for Kids. Kiddle Encyclopedia.