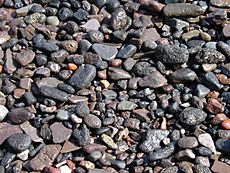 Gravel (largest fragment in this photo is about 4 cm).

Gravel piles at a roadside, waiting for the road repair gang

Particles smaller than gravel are sand, larger particles are cobbles.

Gravel and sand are used for road surfaces, and for cement and Tarmac. Mixtures of gravel and sand mixed with various crushed material, are known as aggregate in the trade. This is used for drainage in the basement of roads, and other purposes.

Natural gravel comes from ancient beaches which have not consolidated (turned into solid rock). In effect, beaches from (for instance) the Jurassic are dug up in quarries. The material is then sifted into size categories. The gravel and sand is then sold on to engineering companies. Most natural sand and gravel is silica, SiO2, in its chemistry. This is very hard-wearing.

However, if the material is originally in hard rock form, then it is first crushed. This enables the industry to offer other materials such as granite or limestone, originally solid rock, as gravel.

The open-cast mining and processing of gravel, sand and aggregate is a huge world-wide industry, sometimes called "conglomerates".

All content from Kiddle encyclopedia articles (including the article images and facts) can be freely used under Attribution-ShareAlike license, unless stated otherwise. Cite this article:
Gravel Facts for Kids. Kiddle Encyclopedia.