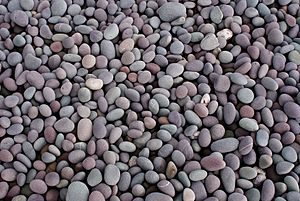 Pebbles on a shingle beach in Somerset, England

A pebble is a clast of rock with a particle size of 2 to 64 millimetres based on the Krumbein phi scale of sedimentology. Pebbles are generally considered larger than granules (2 to 4 millimetres diameter) and smaller than cobbles (64 to 256 millimetres diameter). A rock made predominantly of pebbles is termed a conglomerate. Pebble tools are among the earliest known man-made artifacts, dating from the Palaeolithic period of human history.

A beach composed chiefly of surface pebbles is commonly termed a shingle beach. This type of beach has armoring characteristics with respect to wave erosion, as well as ecological niches that provide habitat for animals and plants.

Inshore banks of shingle (large quantities of pebbles) exist in some locations, such as the entrance to the River Ore, where the moving banks of shingle give notable navigational challenges.

Pebbles come in various colors and textures and can have streaks, known as veins, of quartz or other minerals. Pebbles are mostly smooth but, dependent on how frequently they come in contact with the sea, they can have marks of contact with other rocks or other pebbles. Pebbles left above the high water mark may have growths of organisms such as lichen on them, signifying the lack of contact with seawater.

Pebbles are found in two locations – on the beaches of various oceans and seas, and inland where ancient seas used to cover the land. When then the seas retreated, the rocks became landlocked. They can also be found in lakes and ponds. Pebbles can also form in rivers, and travel into estuaries where the smoothing continues in the sea.

Beach pebbles and river pebbles (also known as river rock) are distinct in their geological formation and appearance. 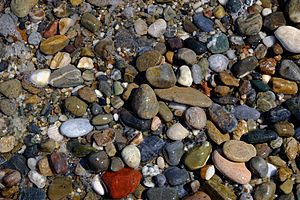 Beach pebbles form gradually over time as the ocean water washes over loose rock particles. The result is a smooth, rounded appearance. The typical size range is from 2 mm to 50 mm. The colors range from translucent white to black, and include shades of yellow, brown, red and green. Some of the more plentiful pebble beaches are found along the coast of the Pacific Ocean, beginning in the United States and extending down to the tip of South America in Argentina. Other pebble beaches are found in northern Europe (particularly on the beaches of the Norwegian Sea), along the coast of the U.K. and Ireland, on the shores of Australia, and around the islands of Indonesia and Japan.

Inland pebbles (river pebbles of river rock) are usually found along the shores of large rivers and lakes. These pebbles form as the flowing water washes over rock particles on the bottom and along the shores of the river. The smoothness and color of river pebbles depends on several factors, such as the composition of the soil of the river banks, the chemical characteristics of the water, and the speed of the current. Because river current is gentler than the ocean waves, river pebbles are usually not as smooth as beach pebbles. The most common colors of river rock are black, grey, green, brown and white. 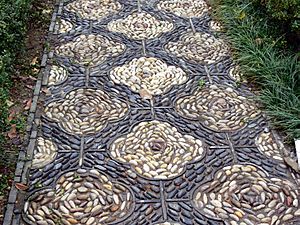 A walkway decorated with pebbles set into concrete.

On Mars, slabs of pebbly conglomerate rock have been found and have been interpreted by scientists as having formed in an ancient streambed. The gravels, which were discovered by NASA's Mars rover Curiosity, range from the size of sand particles to the size of golf balls. Analysis has shown that the pebbles were deposited by a stream that flowed at walking pace and was ankle- to hip-deep.

All content from Kiddle encyclopedia articles (including the article images and facts) can be freely used under Attribution-ShareAlike license, unless stated otherwise. Cite this article:
Pebble Facts for Kids. Kiddle Encyclopedia.