Construction is the process of erection or assembly of any building or infrastructure on a site. In general, there are three types of construction:

Construction of a pre-fabricated house.

Building construction is the process of adding structure to real property. Industrial construction, though a relatively small part of the entire construction industry, is a very important component.

The first buildings were huts and shelters, constructed by hand or with simple tools. As cities grew during the Bronze Age, a class of professional craftsmen appeared. Occasionally, slaves were used for construction work. In the Middle Ages, these were organized into guilds. In the 19th century, steam-powered machinery appeared, and later diesel- and electric powered vehicles such as cranes, excavators and bulldozers. 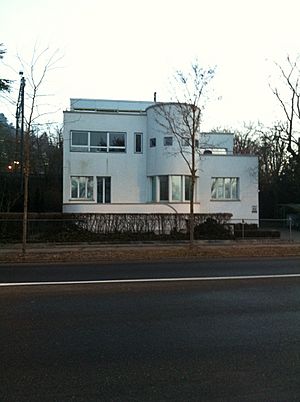 A house of this style

Modern construction is consistently made of materials such as glass, steel, concrete and bricks. So it is easy to build simple forms like simple cubic forms. The new style of architecture is based on the economic basic principle:

All content from Kiddle encyclopedia articles (including the article images and facts) can be freely used under Attribution-ShareAlike license, unless stated otherwise. Cite this article:
Construction Facts for Kids. Kiddle Encyclopedia.