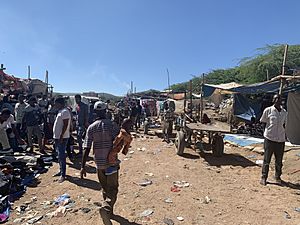 Dire Dawa is one of two chartered cities in Ethiopia. The other chartered city is Addis Ababa, the capital. It is divided administratively into two woredas, the city proper and the non-urban woreda of Gurgura.

It is on the Dechatu River. The western outskirts of the city are on the Gorro River.

The Dire Dawa University was created in 2006.

All content from Kiddle encyclopedia articles (including the article images and facts) can be freely used under Attribution-ShareAlike license, unless stated otherwise. Cite this article:
Dire Dawa Facts for Kids. Kiddle Encyclopedia.