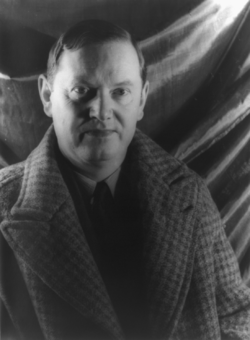 Evelyn Waugh (pronounce like the word "war") (28 October 1903 – 10 April 1966) was an English writer. He was born in Hampstead and raised in Golders Green, both in north-west London.

Waugh is well known for his satirical novels which include Decline and Fall, Vile Bodies, Scoop, A Handful of Dust and The Loved One, and especially for Brideshead Revisited and the Sword of Honour trilogy. When he was writing these novels he used experiences that he had in his own life. He often described British aristocracy and high society, making satirical fun of them. However, in his real life he was also attracted to them.

Waugh was a convert to Catholicism. His travel writings and his diaries and letters have also been published.

All content from Kiddle encyclopedia articles (including the article images and facts) can be freely used under Attribution-ShareAlike license, unless stated otherwise. Cite this article:
Evelyn Waugh Facts for Kids. Kiddle Encyclopedia.