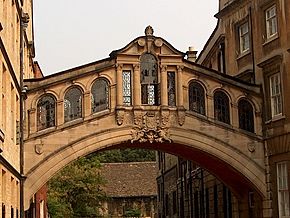 Bridge of Sighs at Hertford College

In 1710, William Newton became the Principal of Hart Hall. In 1723, Newton formally proposed that Hart Hall be chartered as its own college. In 1740 a charter was granted for the new Hertford College. After Newton died, however, the college declined, and it was dissolved in 1816.

All content from Kiddle encyclopedia articles (including the article images and facts) can be freely used under Attribution-ShareAlike license, unless stated otherwise. Cite this article:
Hertford College, Oxford Facts for Kids. Kiddle Encyclopedia.