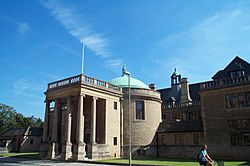 The Rhodes Scholarship is an international postgraduate award for students to study at the University of Oxford. It was established in 1902, making it the first large-scale programme of international scholarship. The Rhodes Scholarship was founded by English businessman and politician Cecil John Rhodes, to promote unity between English-speaking nations and instill a sense of civic-minded leadership and moral fortitude in future leaders irrespective of their chosen career paths. Although initially restricted to male applicants from countries which are today within the British Commonwealth, as well as Germany and the United States, today the scholarship is open to applicants from all backgrounds and from across the globe.

All content from Kiddle encyclopedia articles (including the article images and facts) can be freely used under Attribution-ShareAlike license, unless stated otherwise. Cite this article:
Rhodes Scholarship Facts for Kids. Kiddle Encyclopedia.