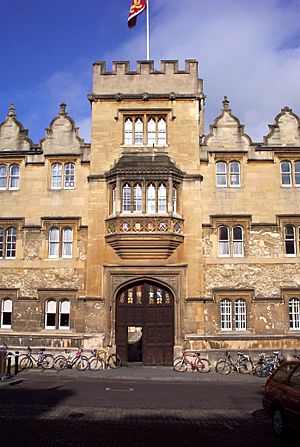 The full name of the college is "The Provost and Scholars of the House of the Blessed Mary the Virgin in Oxford, commonly called Oriel College, of the Foundation of Edward the Second of famous memory, sometime King of England".

The common name of the college refers to one of its earliest buildings That building, which no longer exists, featured a prominent bay window, known as an oriel.

All content from Kiddle encyclopedia articles (including the article images and facts) can be freely used under Attribution-ShareAlike license, unless stated otherwise. Cite this article:
Oriel College, Oxford Facts for Kids. Kiddle Encyclopedia.