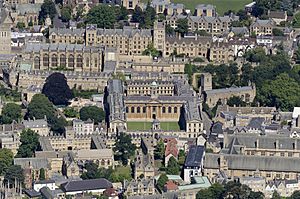 The Queen's College is a constituent college of the University of Oxford, England. The college was founded in 1341 by Robert de Eglesfield in honour of Queen Philippa of Hainault (wife of King Edward III of England). It is distinguished by its predominantly neoclassical architecture, which includes buildings designed by Sir Christopher Wren and Nicholas Hawksmoor.

In 2018, the college had an endowment of £291 million, making it the fourth-wealthiest college (after Christ Church, St. John's, and All Souls).

All content from Kiddle encyclopedia articles (including the article images and facts) can be freely used under Attribution-ShareAlike license, unless stated otherwise. Cite this article:
The Queen's College, Oxford Facts for Kids. Kiddle Encyclopedia.