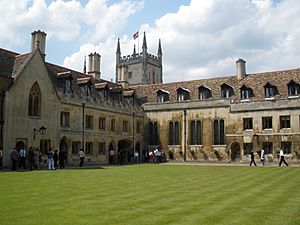 The first court of Pembroke College

Pembroke College is one of the colleges of the University of Cambridge, England. It was created in 1347 on Christmas Eve. This was when Edward III gave Marie de St Pol the right to build a new college. She was the wife of the Earl of Pembroke, who died in 1327. The name of the college comes from him. However, it used to be called Hall of Valence Mary and only in 1856 the name was changed to the current one.

Pembroke College has about 700 students. The buildings within the college are of very different age. The oldest ones are from the 14th century, including the Chapel. The Hall was built later in the 1850s, and many of the student's rooms after the 1950s. It is found on Trumpington Street, which is near King's Parade, the main street in Cambridge.

Some very important people have studied here, like John Sulston (he won the 2002 Nobel Prize in Physiology or Medicine) and Edmund Spenser (a poet).

All content from Kiddle encyclopedia articles (including the article images and facts) can be freely used under Attribution-ShareAlike license, unless stated otherwise. Cite this article:
Pembroke College, Cambridge Facts for Kids. Kiddle Encyclopedia.