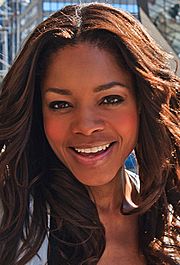 Naomie Melanie Harris (born 6 September 1976) is a British movie, stage, voice, and television actress. She is known for her role as Tia Dalma/Calypso in Pirates of the Caribbean: Dead Man's Chest and in Pirates of the Caribbean: At World's End. She was born in London on September 6, 1976 to a Jamaican mother and a Trinidadian father. Harris played Winnie Mandela in the 2013 movie Mandela: Long Walk to Freedom.

All content from Kiddle encyclopedia articles (including the article images and facts) can be freely used under Attribution-ShareAlike license, unless stated otherwise. Cite this article:
Naomie Harris Facts for Kids. Kiddle Encyclopedia.