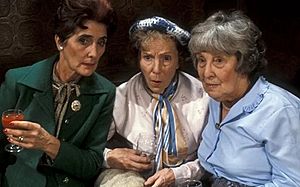 EastEnders is a soap opera in the United Kingdom. It has been running since February 1985, and has had over 5700 episodes. The programme is a rival of Coronation Street and Emmerdale. It is usually shown on BBC One.

The programme is in a pretend area of East London, called Walford. It is filmed in Elstree, a village in Borehamwood. Like Coronation Street, most action is around a local pub. The pub in EastEnders is called The Queen Vic.

Arguments between members of one family, or between different families, are often in the storyline.

It has won six BAFTA awards.

All content from Kiddle encyclopedia articles (including the article images and facts) can be freely used under Attribution-ShareAlike license, unless stated otherwise. Cite this article:
EastEnders Facts for Kids. Kiddle Encyclopedia.