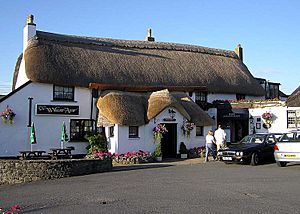 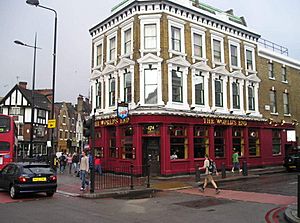 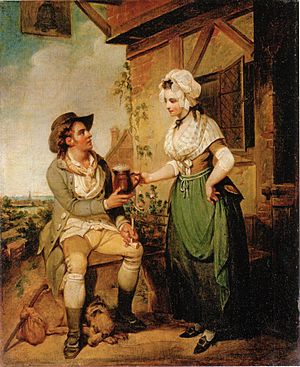 The Ale-House Door (painting of c. 1790 by Henry Singleton)

A pub, or public house, is an establishment licensed to sell alcoholic drinks, which traditionally include beer (such as ale) and cider. It is a social drinking establishment and a prominent part of British, Irish, Breton, New Zealand, South African and Australian cultures. In many places, especially in villages, a pub is the focal point of the community. In his 17th-century diary Samuel Pepys described the pub as "the heart of England".

Pubs can be traced back to Roman taverns, through the Anglo-Saxon alehouse to the development of the tied house system in the 19th century. In 1393, King Richard II of England introduced legislation that pubs had to display a sign outdoors to make them easily visible for passing ale tasters, who would assess the quality of ale sold.

Most pubs focus on offering beers, ales and similar drinks. As well, pubs often sell wines, spirits, and soft drinks, meals and snacks. The owner, tenant or manager (licensee) is known as the pub landlord or landlady, or publican. Referred to as their "local" by regulars, pubs are typically chosen for their proximity to home or work, the availability of a particular beer or ale or a good selection, good food, a social atmosphere, the presence of friends and acquaintances, and the availability of recreational activities such as a darts team, a skittles team, and a pool or snooker table. The pub quiz was established in the UK in the 1970s. 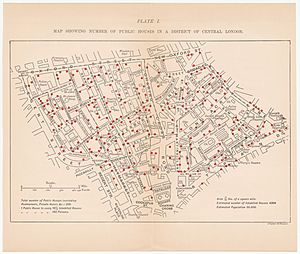 The inhabitants of the British Isles have been drinking ale since the Bronze Age, but it was with the arrival of the Roman Empire on its shores in the 1st century, and the construction of the Roman road networks that the first inns, called tabernae, in which travellers could obtain refreshment, began to appear.

After the departure of Roman authority in the 5th century and the fall of the Romano-British kingdoms, the Anglo-Saxons established alehouses that may have grown out of domestic dwellings, first attested in the 10th century. These alehouses quickly evolved into meeting houses for the folk to socially congregate, gossip and arrange mutual help within their communities. The Wantage law code of Æthelred the Unready proscribes fines for breaching the peace at meetings held in alehouses. Herein lies the origin of the modern public house, or "pub" as it is colloquially called in England. 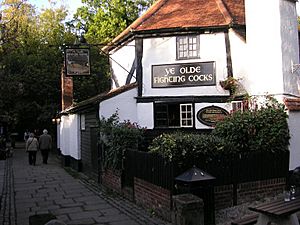 Ye Olde Fighting Cocks in St Albans, Hertfordshire, which holds the Guinness World Record for the oldest pub in England

A traveller in the early Middle Ages could obtain overnight accommodation in monasteries, but later a demand for hostelries grew with the popularity of pilgrimages and travel. The Hostellers of London were granted guild status in 1446 and in 1514 the guild became the Worshipful Company of Innholders. A survey in 1577 of drinking establishment in England and Wales for taxation purposes recorded 14,202 alehouses, 1,631 inns, and 329 taverns, representing one pub for every 187 people. 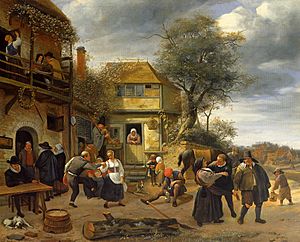 Peasants before an Inn by Dutch artist Jan Steen c. 1653

Inns are buildings where travellers can seek lodging and, usually, food and drink. They are typically located in the country or along a highway. In Europe, they possibly first sprang up when the Romans built a system of roads two millennia ago. Some inns in Europe are several centuries old. In addition to providing for the needs of travellers, inns traditionally acted as community gathering places.

In Europe, it is the provision of accommodation, if anything, that now distinguishes inns from taverns, alehouses and pubs. The latter tend to provide alcohol (and, in the UK, soft drinks and often food), but less commonly accommodation. Inns tend to be older and grander establishments: historically they provided not only food and lodging, but also stabling and fodder for the traveller's horse(s) and on some roads fresh horses for the mail coach.

Famous London inns include The George, Southwark and The Tabard. There is, however, no longer a formal distinction between an inn and other kinds of establishment. Many pubs use "Inn" in their name, either because they are long established former coaching inns, or to summon up a particular kind of image, or in many cases simply as a pun on the word "in", as in "The Welcome Inn", the name of many pubs in Scotland.

The original services of an inn are now also available at other establishments, such as hotels, lodges, and motels, which focus more on lodging customers than on other services, although they usually provide meals; pubs, which are primarily alcohol-serving establishments; and restaurants and taverns, which serve food and drink. In North America, the lodging aspect of the word "inn" lives on in hotel brand names like Holiday Inn, and in some state laws that refer to lodging operators as innkeepers.

The Inns of Court and Inns of Chancery in London started as ordinary inns where barristers met to do business, but became institutions of the legal profession in England and Wales.

Public houses may be owned and operated in different ways. Breweries may own a number of pubs themselves. Pubs may be run as franchises by large catering companies. However they are owned, a pub will be managed by a "landlord" or "landlady". Employees do different jobs to provide good service. Bartenders (also called "barmen" or "barmaids") serve drinks at the bar. In most pubs, the customer orders the drinks at the bar and waits for them to be prepared, then carries the drinks back to the tables or area of seating. In some types of pubs may sit at the bar or remain standing with their drinks. Some pubs hire servers, called waiters or waitresses, to bring drinks to people who are sitting at tables or in chairs. Some pubs also hire people to take away empty bottles and glasses, though commonly the bartenders will do this as well.

Pubs that serve food have cooks, dishwashers, and servers to prepare, cook, and serve the food. Bands and singers who entertain customers during the evening are not usually employees of the pub. Instead, the pub signs a contract with these entertainers, in which the entertainer promises to come to the pub on a specified day or night, in return for a sum of money.

Another type of business that serves alcohol is the nightclub. Like pubs, some nightclubs also serve food and have bands or singers as entertainers. Most people go to nightclubs because they enjoy the music and dancing. However, nightclubs often have a much wider selection of alcoholic drinks than pubs. Most nightclubs sell a number of different brands of spirits, liqueurs, wine, sherry, and aperitifs.

The bartenders (also called "barmen" or "barmaids") at nightclubs often make a much larger variety of mixed drinks, or cocktails, than those who work in pubs.

All content from Kiddle encyclopedia articles (including the article images and facts) can be freely used under Attribution-ShareAlike license, unless stated otherwise. Cite this article:
Pub Facts for Kids. Kiddle Encyclopedia.