St Albans is a city in Hertfordshire, England, and the major urban area in the City and District of St Albans. It lies east of Hemel Hempstead and west of Hatfield, about 19 miles (31 km) north-northwest of London, 8 miles (13 km) southwest of Welwyn Garden City and 11 miles (18 km) south-southeast of Luton. St Albans was the first major town on the old Roman road of Watling Street for travellers heading north, and it became the Roman city of Verulamium. It is a historic market town and is now a dormitory town within the London commuter belt and the Greater London Built-up Area.

St Albans takes its name from the first British saint, Alban. The most elaborate version of his story, Bede's Ecclesiastical History of the English People, relates that he lived in Verulamium, sometime during the 3rd or 4th century, when Christians were suffering persecution. Alban met a Christian priest fleeing from his persecutors and sheltered him in his house, where he became so impressed with the priest's piety that he converted to Christianity. When the authorities searched Alban's house, he put on the priest's cloak and presented himself in place of his guest. Consequently, he was sentenced to endure the punishments that were to be inflicted upon the priest, unless he renounced Christianity. Alban refused and was taken for execution. In later legends, his head rolled downhill after execution and a well sprang up where it stopped.

There was an Iron Age settlement known as Verulamium, Verlamion, or Verlamio, near the site of the present city, the centre of Tasciovanus' power and a major centre of the Catuvellauni from about 20 BC until shortly after the Roman invasion of AD 43. The name "Verulamium" is Celtic, meaning "settlement over or by the marsh". The town was on Prae Hill, 2 km to the west of modern St Albans, now covered by the village of St. Michael's, Verulamium Park and the Gorhambury Estate. It is believed that the tribal capital was moved to the site by Tasciovanus (around 25 to 5 BC). Cunobelinus may have constructed Beech Bottom Dyke, a defensive earthwork near the settlement whose significance is uncertain.

The Roman city of Verulamium, the second-largest town in Roman Britain after Londinium, developed from the Celtic settlement and was granted the rank of municipium around AD 50, meaning that its citizens had what were known as "Latin Rights", a lesser citizenship status than a colonia possessed. It grew to a significant town, and as such received the attentions of Boudica of the Iceni in 61, when Verulamium was sacked and burnt on her orders: a black ash layer has been recorded by archaeologists, thus confirming the Roman written record. It grew steadily; by the early 3rd century, it covered an area of about 125 acres (0.51 km2), behind a deep ditch and wall. Verulamium contained a forum, basilica and a theatre, much of which were damaged during two fires, one in 155 and the other in around 250. One of the few extant Roman inscriptions in Britain is found on the remnants of the forum (see Verulamium Forum inscription). The town was rebuilt in stone rather than timber at least twice over the next 150 years. Occupation by the Romans ended between 400 and 450.

St Alban was probably buried outside the city walls in a Roman cemetery near the present Cathedral. His hillside grave became a place of pilgrimage. Recent investigation has uncovered a basilica there, indicating the oldest continuous site of Christian worship in Great Britain. In 429 Germanus of Auxerre visited the church and subsequently promoted the cult of St Alban.

There are a few remains of the Roman city visible, such as parts of the city walls, a hypocaust still in situ under a mosaic floor, and the theatre, which is on land belonging to the Earl of Verulam, as well as items in the museum. More remains under the nearby agricultural land which have never been excavated were for a while seriously threatened by deep ploughing.

After the Roman withdrawal the town, became the centre of the territory or regio of the Anglo-Saxon Waeclingas tribe.

St Albans Abbey and the associated Anglo-Saxon settlement were founded on the hill outside the Roman city where it was believed St Alban was buried. An archaeological excavation in 1978, directed by Martin Biddle, failed to find Roman remains on the site of the medieval chapter house. As late as the eighth century the Saxon inhabitants of St Albans nearby were aware of their ancient neighbour, which they knew alternatively as Verulamacæstir or, under what H. R. Loyn terms "their own hybrid", Vaeclingscæstir, "the fortress of the followers of Wæcla", possibly a pocket of British-speakers remaining separate in an increasingly Saxonised area.

The medieval town grew on the hill to the east of Wæclingacaester where the Benedictine Abbey of St Albans was founded by Ulsinus in 793. There is some evidence that the original site was higher up the hill than the present building, which was begun in 1077. St Albans Abbey was the principal abbey medieval in England. The scribe Matthew Paris lived there and the first draft of Magna Carta was drawn up there. It became a parish church after the dissolution of the Benedictine abbey in 1539 and was made a cathedral in 1877.

St Albans School was founded in AD 948. Matthew Paris was educated there and it is the only school in the English-speaking world to have educated a Pope (Adrian IV). Now a public school, it has, since 1871, occupied a site to the west of the Abbey and includes the 14th-century Abbey Gateway. One of its buildings was a hat factory, a link with the city's industrial past. 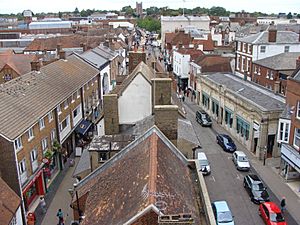 St Albans viewed from the Clock Tower: French Row (to the left), Market Place (to the right), St Peter's Street and the tower of St Peter's Church (centre)

On Abbey Mill Lane, the road between the Abbey and the school, are the palaces of the Bishops of St Albans and Hertford and Ye Olde Fighting Cocks, claimed to be the oldest pub in England.

Between 1403 and 1412 Thomas Wolvey was engaged to build a clock tower in the Market Place. It is the only extant medieval town belfry in England. The original bell, named for the Archangel Gabriel sounds F-natural and weighs one ton. Gabriel sounded at 4 am for the Angelus and at 8 or 9 pm for the curfew. The ground floor of the tower was a shop until the 20th century. The first- and second-floor rooms were designed as living chambers. The shop and the first floor were connected by a flight of spiral stairs. Another flight rises the whole height of the tower by 93 narrow steps and gave access to the living chamber, the clock and the bell without disturbing the tenant of the shop.

A street market on Wednesdays and Saturdays, founded by Abbot Ulsinus, still flourishes.

Before the 20th century St Albans was a rural market town, a Christian pilgrimage site, and the first coaching stop of the route to and from London, accounting for its numerous old inns. Victorian St Albans was small and had little industry. Its population grew more slowly than London, 8–9% per decade between 1801 and 1861, compared to the 31% per decade growth of London in the same period. The railway arrived relatively late, in 1858. In 1869 the extension of the city boundaries was opposed by the Earl of Verulam and many of the townsfolk, but there was rapid expansion and much building at the end of the century, and between 1891 and 1901 the population grew by 37%.

In 1877, in response to a public petition, Queen Victoria issued the second royal charter, which granted city status to the borough and Cathedral status to the former Abbey Church. The new diocese was established in the same year, in the main from parts of the large Diocese of Rochester.

In the inter-war years it became a centre for the electronics industry. In the post-World War II years it expanded rapidly as part of the post-War redistribution of population out of Greater London. It is now a popular tourist destination. 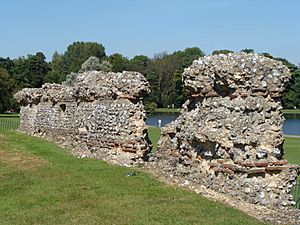 St Albans has an oceanic climate (Köppen climate classification Cfb) similar to most of the United Kingdom.

Nearby towns and villages

St Albans City station is served by Thameslink on a frequent and fast rail link through central London. Suburban services stop at all stations on the route, while express services are non-stop to London St Pancras International (St Albans City station to St Pancras International – 18 minutes). Trains run north to Harpenden, Luton, Luton Airport Parkway and on to Bedford.

St Albans Abbey station is the terminus of a single-track line from Watford Junction station. 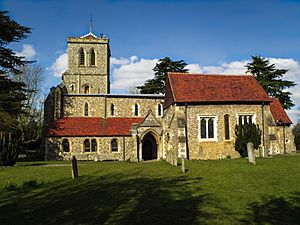 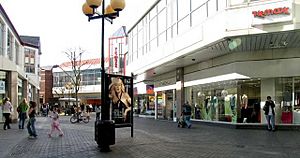 The St Albans Museum service runs two museums: Verulamium Museum, which tells the story of everyday life in Roman Britain using objects from the excavations of the important Roman Town; and the Museum of St Albans, which focuses on the history of the town and of Saint Alban. The Watercress nature reserve is by the River Ver and is run by the Watercress Wildlife Association.

St Albans Museums and Galleries Trust, in partnership with St Albans Museums and the University of Hertfordshire, have launched a project, "Renaissance: St Albans", to convert the old town hall into a museum and art gallery, combining the University's Margaret Harvey Gallery and the Museum of St Albans, which have closed in anticipation of the move. The cost of the project is £7.75m, of which (at February 2016) £6.3m has been raised.

The area is served by Radio Verulam, a community radio station.

The mixed character of St Albans and its proximity to London have made it a popular filming location. The Abbey and Fishpool Street areas were used for the pilot episode of the 1960s ecclesiastical TV comedy All Gas and Gaiters. The area of Romeland, directly north of the Abbey Gateway and the walls of the Abbey and school grounds, can be seen masquerading as part of an Oxford college in some episodes of Inspector Morse (and several local pubs also appear). Fishpool Street, running from Romeland to St Michael's village, stood in for Hastings in some episodes of Foyle's War. Life Begins was filmed largely in and around St Albans. The Lady Chapel in the Abbey itself was used as a location for at least one scene in Sean Connery's 1995 film First Knight, whilst the nave of the Abbey was used during a coronation scene as a substitute for Westminster Abbey in Johnny English starring Rowan Atkinson. The 19th-century gatehouse of the former prison near the mainline station appeared in the title sequence of the TV series Porridge, starring Ronnie Barker. The 2001 film Birthday Girl starring Ben Chaplin and Nicole Kidman was also partly filmed in St Albans.

More recently, several scenes from the film Incendiary, starring Michelle Williams, Ewan McGregor and Matthew Macfadyen, were filmed in St Albans, focusing in particular on the Abbey and the Abbey Gateway.

All content from Kiddle encyclopedia articles (including the article images and facts) can be freely used under Attribution-ShareAlike license, unless stated otherwise. Cite this article:
St Albans Facts for Kids. Kiddle Encyclopedia.