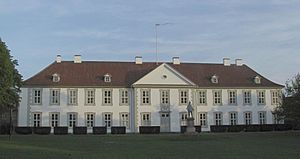 Odense is the third largest city in Denmark with about 146,000 inhabitants and the capital of the island of Funen (Danish: Fyn).

It was started in 988 A.D. and was sometimes the seat of the parliament. In 1805, it became capital of the island Funen.

All content from Kiddle encyclopedia articles (including the article images and facts) can be freely used under Attribution-ShareAlike license, unless stated otherwise. Cite this article:
Odense Facts for Kids. Kiddle Encyclopedia.