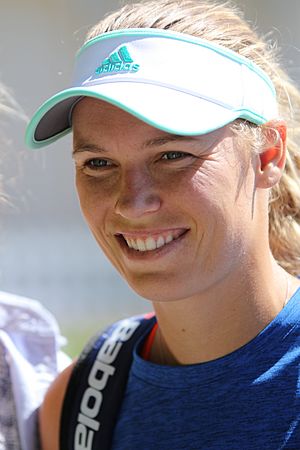 Caroline Wozniacki (born 11 July 1990) is a Danish professional tennis player. As of January 2018, she is the number 2 ranked female tennis player in the world. She used to be world number one. In her career, she has won one Grand Slam (2018 Australian Open) and 23 singles tournaments on the Women's Tennis Association (WTA) Tour. She also reached the finals of the 2009 and 2014 U.S. Open. She lost to Kim Clijsters and Serena Williams.

Wozniacki was born in Odense to Polish Catholic immigrant parents. She was engaged to golfer Rory McIlroy until 2014.

All content from Kiddle encyclopedia articles (including the article images and facts) can be freely used under Attribution-ShareAlike license, unless stated otherwise. Cite this article:
Caroline Wozniacki Facts for Kids. Kiddle Encyclopedia.