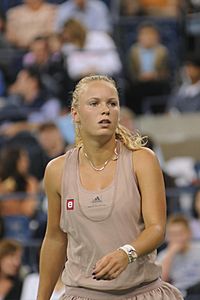 Caroline Wozniacki is the current WTA singles number one.

The Women's Tennis Association (WTA) Tour is the number one tier professional tennis tour for women's tennis competition. The 2011 WTA Tour calendar comprises the Grand Slam tournaments (organised by the International Tennis Federation (ITF)), the WTA Premier tournaments (Premier Mandatory, Premier 5 and regular Premier), the WTA International tournaments, the Fed Cup (organised by the ITF), and the year-end championships (the Commonwealth Bank Tournament of Champions and the WTA Tour Championships). Also included in the 2011 calendar is the Hopman Cup, which does not distribute ranking points, and is organised by the ITF.

This is the complete schedule of events on the 2011 WTA Tour. Player progression will be documented from the quarterfinals stage.

All content from Kiddle encyclopedia articles (including the article images and facts) can be freely used under Attribution-ShareAlike license, unless stated otherwise. Cite this article:
2011 WTA Tour Facts for Kids. Kiddle Encyclopedia.