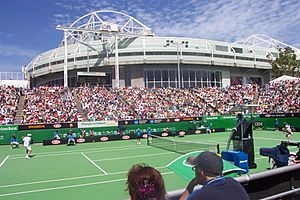 Two players on an outdoor court

Before 1983, many of the best tennis players did not play at the tournament. This was because the Australian Open was far away from Europe and North America and was not considered as important as the other Grand Slam tournaments.

The tournament is played in January, during the Australian summer. In 1998 an extreme heat rule was brought in. It is the only major tournament that has a heat policy. If the temperature gets higher than 35 degrees (C) matches may have to be stopped for a short time, because players feel dehydrated. Matches on the outside courts are stopped. The roof over the main stadium courts can be closed, and cooling systems turned on. In 2007 the temperature on the courts reached 50 degrees Celsius.

All content from Kiddle encyclopedia articles (including the article images and facts) can be freely used under Attribution-ShareAlike license, unless stated otherwise. Cite this article:
Australian Open Facts for Kids. Kiddle Encyclopedia.