Serena Jameka Williams (born September 26, 1981) is an American professional tennis player and former world No. 1 in women's single tennis. She has won 23 Grand Slam singles titles, the most by any player in the Open Era, and the second-most of all time behind Margaret Court (24). The Women's Tennis Association (WTA) ranked her world No. 1 in singles on eight separate occasions between 2002 and 2017. She reached the No. 1 ranking for the first time on July 8, 2002. On her sixth occasion, she held the ranking for 186 consecutive weeks, tying the record set by Steffi Graf. In total, she has been No. 1 for 319 weeks, which ranks third in the Open Era among female players behind Graf and Martina Navratilova.

Williams has won 14 Grand Slam doubles titles, all with her sister Venus, and the pair are unbeaten in Grand Slam doubles finals. As a team, she and Venus have the third most women's doubles Grand Slam titles, behind the 18 titles of Natasha Zvereva (14 with Gigi Fernández) and the record 20 titles won by Martina Navratilova and Pam Shriver. Williams is also a five-time winner of the WTA Tour Championships in the singles division. She has also won four Olympic gold medals, one in women's singles and three in women's doubles—an all-time record shared with her sister, Venus. The arrival of the Williams sisters has been credited with ushering in a new era of power and athleticism on the women's professional tennis tour. She is ranked at No. 10 in the world by the WTA as of October 12, 2020.

Earning almost $29 million in prize money and endorsements, Williams was the highest paid female athlete in 2016. She repeated this feat in 2017 when she was the only woman on Forbes' list of the 100 highest paid athletes with $27 million in prize money and endorsements. She has won the 'Laureus Sportswoman of the Year' award four times (2003, 2010, 2016, 2018), and in December 2015, she was named Sportsperson of the Year by Sports Illustrated magazine. In 2019, she was ranked 63rd in Forbes' World's Highest-Paid Athletes list. 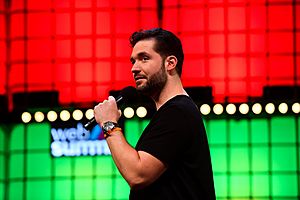 Williams is married to Reddit co-founder Alexis Ohanian. Ohanian proposed to Williams on December 10, 2016 in Rome. On December 30, 2016, Williams announced her engagement to Ohanian in a Reddit post. They were married on November 16, 2017, in New Orleans. Guests at the wedding included Beyoncé, Anna Wintour, Kelly Rowland and Kim Kardashian West. She planned to move to San Francisco with Ohanian after the wedding.

In September 2017, Williams gave birth to a daughter. Williams gave her daughter a doll, Qai Qai, that has become famous on social media.

Williams was raised a Jehovah's Witness, but says she has "never really practiced it." She often thanks Jehovah after winning matches. Williams confirmed that she follows some practices: "Olympia doesn't celebrate birthdays. We're Jehovah's Witnesses, so we don't do that."

All content from Kiddle encyclopedia articles (including the article images and facts) can be freely used under Attribution-ShareAlike license, unless stated otherwise. Cite this article:
Serena Williams Facts for Kids. Kiddle Encyclopedia.