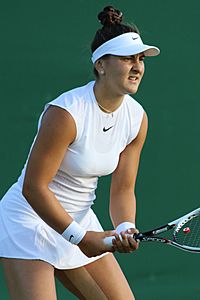 She has a career-high ranking of No. 4 in the world, and is the highest-ranked Canadian in the history of the Women's Tennis Association (WTA).

Andreescu was the champion at the US Open and the Canadian Open in 2019, beating Serena Williams to win both titles.

All content from Kiddle encyclopedia articles (including the article images and facts) can be freely used under Attribution-ShareAlike license, unless stated otherwise. Cite this article:
Bianca Andreescu Facts for Kids. Kiddle Encyclopedia.