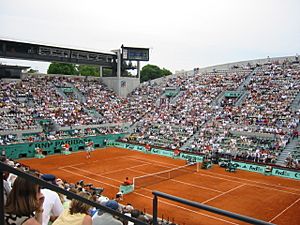 The French Open is one of the four Grand Slam tennis tournaments. It is played in Paris, France. The first competition was held in 1891.

The French Open is known for being the only Grand Slam played on a clay court. On a clay court the ball bounces much slower and higher than on hard or grass courts. This makes it more difficult to win the point and rallies (the number of shots in a point) usually last longer. Players that excel on clay courts are called clay-court specialists.

The tournament is played for two weeks. It starts in late May and finishes in early June.

Sometimes, the French Open is called the Roland Garros tournament. Roland Garros was a well-known aviator from World War I who had the main tennis court named after him.

All content from Kiddle encyclopedia articles (including the article images and facts) can be freely used under Attribution-ShareAlike license, unless stated otherwise. Cite this article:
French Open Facts for Kids. Kiddle Encyclopedia.