Evert reached 34 Grand Slam singles finals, more than any other player in the history of professional tennis. She holds the record of most consecutive years to win at least one Grand Slam title with 13. Evert reached the semifinals or better, in singles, of 52 of the 56 Grand Slams she played, including the semifinals or better of 34 consecutive Grand Slams entered from the 1971 US Open through the 1983 French Open. Evert never lost in the first or second round of a Grand Slam singles tournament. In Grand Slam women's singles play, Evert won a record seven championships at the French Open.

Evert has served as president of the Women's Tennis Association during eleven calendar years, 1975–76 and 1983–91. She was awarded the Philippe Chatrier award and inducted into the Hall of Fame. In later life Evert was a coach and is now an analyst for ESPN and has a line of tennis and active apparel. 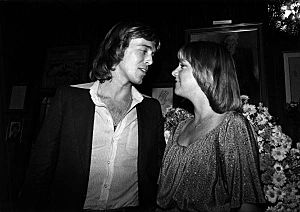 All content from Kiddle encyclopedia articles (including the article images and facts) can be freely used under Attribution-ShareAlike license, unless stated otherwise. Cite this article:
Chris Evert Facts for Kids. Kiddle Encyclopedia.