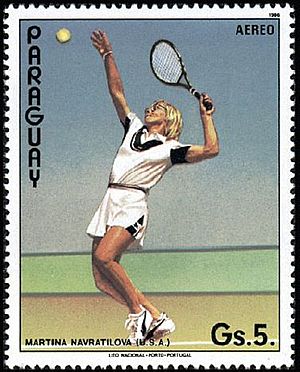 Navratilova was world No. 1 for a total of 332 weeks in singles, and a record 237 weeks in doubles, making her the only player in history to have held the top spot in both singles and doubles for over 200 weeks. She was year-end singles No. 1 seven times, including a record of five consecutive years, as well as year-end doubles No. 1 five times, including three consecutive years during which she held the ranking for the entire year.

She won 18 Grand Slam singles titles, 31 major women's doubles titles (an all-time record), and 10 major mixed doubles titles, combined marking the open-era record for the most number of Grand Slam titles won by one player, male or female. She reached the Wimbledon singles final 12 times, including for nine consecutive years from 1982 through 1990, and won the women's singles title at Wimbledon a record nine times (surpassing Helen Wills Moody's eight Wimbledon titles), including a run of six consecutive titles, widely regarded as the best performance by any professional player at a major event. She and Billie Jean King each won 20 combined Wimbledon titles, an all-time record. Navratilova is also one of just three women ever to have accomplished a Career Grand Slam in women's singles and doubles, and mixed doubles (called the Grand Slam "boxed set"), a distinction she shares only with Margaret Court and Doris Hart.

Navratilova holds the records for most singles (167) and doubles titles (177) in the Open Era. Her record as No. 1 in singles (1982–86) remains the most dominant in professional tennis to date. Over five consecutive seasons, she won 428 out of 442 singles matches, averaging fewer than three losses per year to 87 wins, for a sustained winning percentage of 96.8%. She holds the best season win-loss record in the open era, 86-1 (98.9%) in 1983, and four out of the top six open era seasons. She recorded the longest winning streak in the open era (74 consecutive matches) as well as three out of the six longest winning streaks in history.

She and Serena Williams are the only Open Era players to have won six major singles crowns without the loss of a set. Navratilova, Margaret Court and Maureen Connolly share the record for the most consecutive major singles titles (six). Navratilova reached 11 consecutive major singles finals, second all-time only to Steffi Graf's 13, and is the only woman ever to reach 19 consecutive major semifinals. Navratilova also won the season-ending WTA Tour Championships for top ranked players a record eight times and made the finals a record 14 times. She is the only player of either sex to have won eight different tournaments at least seven times. She was ranked in the world's top 10 in singles for a record 20 consecutive years (1975–1994), a span which included 19 years in the top 5, 15 years in the top 3, and 7 years as the world No. 1 ranked singles player. Navratilova is regarded by many to be the greatest female tennis player of all time.

In women's doubles, Navratilova and Pam Shriver had one of the most successful partnerships in women's doubles and won 109 consecutive matches including all four major titles, the doubles Grand Slam, in 1984. The pair set an all-time record of 79 titles together and tied the record set by Louise Brough Clapp and Margaret Osborne duPont of 20 major women's doubles titles as a team. Navratilova also won the WTA Tour Championships doubles title a record 11 times. She is one of only five tennis players of all-time to win a multiple slam set in two disciplines, matched only by Margaret Court, Roy Emerson, Frank Sedgman and Serena Williams. Navratilova won her last major title in 2006, adding the mixed doubles crown at the 2006 US Open to her resume just a few weeks before her 50th birthday, 32 years after her first Grand Slam title in 1974.

Originally from Czechoslovakia, she was stripped of her citizenship when, in 1975 at age 18, she asked the United States for political asylum and was granted temporary residency. At the time, Navratilova was told by the Czechoslovak Sports Federation that she was becoming too americanised, and she should go back to school and make tennis secondary. Navratilova became a US citizen in 1981, and on January 9, 2008, she reacquired Czech citizenship. She stated she has not renounced her U.S. citizenship nor does she plan to do so, and that reclaiming Czech nationality was not politically motivated.

Navratilova was born Martina Šubertová in Prague, Czechoslovakia. Her parents divorced when she was three, and her mother, an accomplished gymnast, tennis player, and ski instructor, moved the family to Řevnice. In 1962, her mother Jana married Miroslav Navrátil, who became her first tennis coach. Martina then took the name of her stepfather (adding the feminine suffix "ová"), thus becoming Martina Navrátilová.

In 2008, Navratilova's mother died aged 75. Navratilova has a sister, Jana, and an older paternal half-brother. Her grandmother, Agnes Semanska, was a tennis player for the Czechoslovak Federation before the Second World War and had a ranking as high as No. 2 among Czech women during her amateur career.

When Navratilova was four, she was hitting a tennis ball off a concrete wall and started to play tennis regularly at age 7. In 1972, at the age of 15, Navratilova won the Czechoslovakia national tennis championship. In 1973, aged 16, she made her debut on the United States Lawn Tennis Association professional tour but did not turn professional until 1975. Although perhaps most renowned for her mastery of fast low-bouncing grass, her best early showing at majors was on the red clay at the French Open, where she would go on to reach the final six times. In 1973, she made the quarterfinals where she lost 6–7, 4–6 to Evonne Goolagong. She made the quarterfinals the next year and lost to Helga Masthoff (née Niessen), after again losing the first set in a tiebreak.

By winning the 1983 US Open title, Navratilova completed the Career Grand Slam. She became only the seventh female player in history to achieve this.

In 2005, Tennis magazine selected her as the greatest female tennis player for the years 1965 through 2005, directly over Steffi Graf. Billie Jean King, a former World No. 1 player, said in 2006 that Navratilova is "the greatest singles, doubles and mixed doubles player who's ever lived." In 2008, tennis historian and journalist Bud Collins called Navratilova "arguably, the greatest player of all time."

In 2006, Martina Navratilova was named by Equality Forum as one of their 31 Icons of the LGBT History Month.

Tennis writer Steve Flink, in his book The Greatest Tennis Matches of the Twentieth Century (1999), named her as the second best female player of the 20th century, directly behind Steffi Graf.

On August 2, 2013, Navratilova was among the first class of inductees into the National Gay and Lesbian Sports Hall of Fame.

On May 12, 2016, Navratilova was made an honorary fellow of Lucy Cavendish College of the University of Cambridge.

All content from Kiddle encyclopedia articles (including the article images and facts) can be freely used under Attribution-ShareAlike license, unless stated otherwise. Cite this article:
Martina Navratilova Facts for Kids. Kiddle Encyclopedia.