The International Tennis Hall of Fame is located in Newport, Rhode Island, United States. It honors both players and other contributors to the sport of tennis. The complex, the former Newport Casino, includes a museum, grass tennis courts, an indoor tennis facility, and a court tennis (or real tennis) facility. 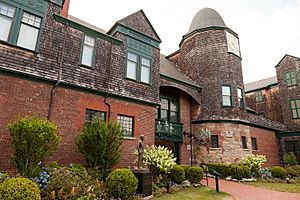 The hall of fame and museum are located in the Newport Casino, which was commissioned in 1879 by James Gordon Bennett Jr. as part of an exclusive resort for wealthy Newport summer residents. It was designed by Charles McKim along with Stanford White, who did the interiors. It is an example of Victorian Shingle Style architecture. In 1881, the Real Tennis Court (housing the National Tennis Club) and the Casino Theatre were constructed at the east end of the campus. The club was opened on July 1, 1880 after a six-month construction period and quickly became a fashionable venue for Newport summer residents.

The United States Lawn Tennis Association held its first championships at the Newport Casino in 1881. The event was held annually through 1914, by which time tennis had become the key attraction at the resort. The championship was suspended during World War I.

But by the 1950s, the retreat was struggling financially, as tourism preferences changed. It was at risk of being demolished for redevelopment of modern retail space, but the building was purchased and saved by Jimmy and Candy Van Alen, wealthy Newport summer residents. A sportsman himself, in 1954, Jimmy Van Alen established the Tennis Hall of Fame and Museum in the Casino. The combination of tennis matches and the museum allowed the building to be saved. 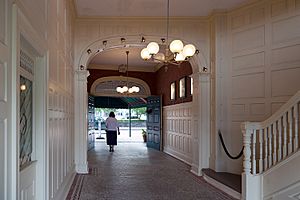 Van Alen intended the facility to be "a shrine to the ideals of the game", and was elected president of the hall in 1957. The International Tennis Hall of Fame was officially sanctioned by the United States Tennis Association at its foundation in 1954. It was recognized by the International Tennis Federation in 1986. The first Hall of Fame members were inducted in 1955; as of 2017, a total of 252 inductees from 23 countries have been recognized.

In 2015, Martina Hingis was appointed as the first Global Ambassador for the International Tennis Hall of Fame. The current Board of Governors includes former professional tennis players Todd Martin, Stan Smith and Katrina Adams.

The museum houses a large collection of artifacts and memorabilia – including videos, photographs, audio recordings, tennis equipment and apparel, trophies, and art – highlighting the history of tennis from its origins up through the modern era. The collection is displayed year-round in the museum's 13,000 square feet (1,200 m2) of exhibit space.

For a description of each award and a list of its recipients, see footnote.

The Hall of Fame hosts several tournaments, including the Hall of Fame Tennis Championships. Part of the men's ATP World Tour, the tournament is the only grass court event in North America. Top male players come to Newport directly from Wimbledon to compete for the Van Alen Cup at the International Tennis Hall of Fame. Past champions include Americans John Isner, and Mardy Fish, as well as two-time champion Fabrice Santoro of France.

For a list of inductees—alphabetically, by country, and by year of induction—see footnote.
Note: Inductees are listed below in two categories (Player category and Contributor category).

*note - Bob Hewitt of South Africa was inducted into the Tennis Hall of Fame in 1992, but he was suspended indefinitely in 2012 and expelled from the Hall in 2016 after being convicted of child sexual offences.

All content from Kiddle encyclopedia articles (including the article images and facts) can be freely used under Attribution-ShareAlike license, unless stated otherwise. Cite this article:
International Tennis Hall of Fame Facts for Kids. Kiddle Encyclopedia.