John Robert Isner (born April 26, 1985) is an American professional tennis player who is currently ranked world No. 8 in men's singles by the Association of Tennis Professionals (ATP). Considered one of the best servers of the ATP World Tour, Isner achieved his career-high singles ranking of world No. 8 in July 2018 by virtue of his maiden Masters 1000 crown at the 2018 Miami Open and a semifinals appearance at Wimbledon 2018. He currently has the 3rd-most aces in the history of ATP, having served 10,617 aces. At the 2010 Wimbledon Championships, he played the longest professional tennis match in history, defeating Nicolas Mahut in a total of 11 hours and 5 minutes of play over the course of three days. 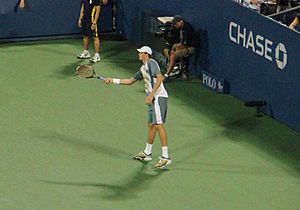 Isner began his professional career in the summer of 2007. With a world ranking of no. 839. He won his first tournament of the summer, the USA F14 Futures, beating the top three seeds along the way. Then, after first-round losses in a Challenger-level and an ATP-level tournament, he beat five top-300 players and three seeds to win the Lexington Challenger in July and improve his ranking to no. 416 after just one month.

At the following week's tournament at the Legg Mason Tennis Classic in Washington, D.C., a late withdrawal freed up a wildcard spot, which was given to Isner at the last minute. Isner took full advantage of his good fortune, recording his first wins over top-100 players. He won third-set tiebreakers on five consecutive days to reach the final, where he fell to fellow American Andy Roddick. His week raised his ranking to no. 193 in the world after six weeks on the pro tour.

In his US Open début, he defeated the 26th-seeded player, former quarterfinalist Jarkko Nieminen, firing 34 aces along the way. He proceeded to win his second-round match against Rik de Voest, before losing in the third round to top seed and eventual champion Roger Federer. Isner was one of only two players to take a set from Federer in the championship. His US Open performance improved his ranking to no. 144.

After the US Open, Isner continued to play exclusively in North America and finished the year ranked no. 107. That year, Isner was added to the United States Davis Cup team as a practice partner. 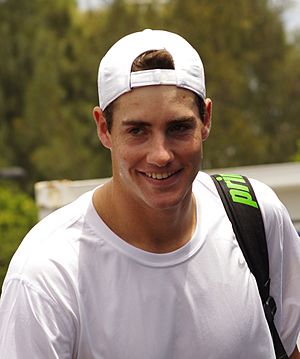 Isner started playing tennis seriously at age 11. He played competitively for Pinetop Sport Club in Greensboro, North Carolina, throughout his childhood. He is a graduate of Walter Hines Page Senior High School, in Greensboro, and the University of Georgia, where he majored in speech communication. He resided in Tampa, Florida, where he trained at the Saddlebrook Academy alongside other American tennis pros such as James Blake and Mardy Fish. Currently, he resides in Dallas, Texas.

Isner's politics have led to controversy in the past. In 2016, he criticized American football player Colin Kaepernick's protests during the national anthem as "pathetic".

Isner married Madison McKinley, a jewelry designer, on December 4, 2017, in South Carolina. They are expecting their first child, a girl, in 2018.

All content from Kiddle encyclopedia articles (including the article images and facts) can be freely used under Attribution-ShareAlike license, unless stated otherwise. Cite this article:
John Isner Facts for Kids. Kiddle Encyclopedia.