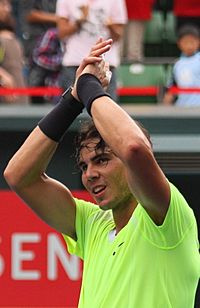 Rafael Nadal is the current ATP singles number one.

This is the complete schedule of events on the 2011 calendar, with player progression documented from the quarterfinals stage.

All content from Kiddle encyclopedia articles (including the article images and facts) can be freely used under Attribution-ShareAlike license, unless stated otherwise. Cite this article:
2011 ATP World Tour Facts for Kids. Kiddle Encyclopedia.