Jo-Wilfried Tsonga born 17 April 1985) is a French professional tennis player. A member of the Tennis Club de Paris (TCP), Tsonga's career-high singles ranking is world No. 5, which he achieved in February 2012.

After being awarded the ATP Newcomer of the Year for 2007, Tsonga rose to fame by virtue of his performance in the 2008 Australian Open when, as an unseeded player, he reached the final, having defeated four seeded players along the way, including a straight-sets win over No. 2 Rafael Nadal in the semifinals. Tsonga eventually lost to the No. 3 Novak Djokovic in the final in four sets, after winning the first set; it was the only set Djokovic dropped during the tournament.

Tsonga followed this up by winning his first ATP Masters Series championship at the 2008 Paris Masters, thus qualifying for the 2008 Tennis Masters Cup in Shanghai, China. His best performances in a major tournament since 2008 are semifinal appearances in the 2010 Australian Open, the 2013 and 2015 French Opens, and at Wimbledon in 2011 and 2012. In 2017, Tsonga helped France to their first Davis Cup win in 16 years after previously being beaten in 2014.

He has reached the quarterfinal stage of all four Grand Slams. He is also the first and one of only three players (the others being Tomáš Berdych and Stan Wawrinka) to have Grand Slam wins against each of the Big Four (namely Roger Federer, Rafael Nadal, Novak Djokovic, and Andy Murray). 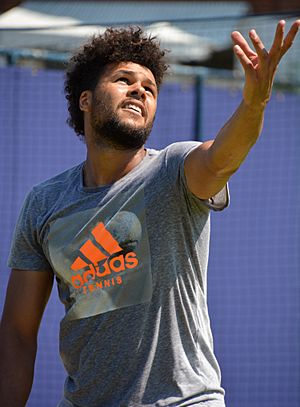 Tsonga was born in Le Mans to a Congolese father, Didier Tsonga, a handball player and a French mother, Évelyne Tsonga. Jo's father moved to France during the 1970s to fulfill his dreams of becoming a handball great, where he eventually met Évelyne and they married. Tsonga is nicknamed Ali, because of his facial resemblance to the boxer.

As a junior, Tsonga reached a ranking of No. 2 in the world and won the US Open title. He reached four other semifinals of junior Grand Slam events. Marcos Baghdatis was a rival of Tsonga on the junior tour.

In 2009, Tsonga switched rackets from Wilson to Babolat. He was using Babolat AeroPro Drive + racket, but recently changed to the upcoming racket Babolat Pure Strike. His strings are LUXiLON Alu Power Rough strings. He is sponsored by Adidas for his attire.

Since late 2014, Tsonga has been dating Noura El Shwekh (she is of Swiss nationality), who frequently accompanies him on the ATP tour. In November 2016, Tsonga announced the couple were expecting their first child. Their first child, a boy named Sugar, was born on 17 March 2017.

All content from Kiddle encyclopedia articles (including the article images and facts) can be freely used under Attribution-ShareAlike license, unless stated otherwise. Cite this article:
Jo-Wilfried Tsonga Facts for Kids. Kiddle Encyclopedia.