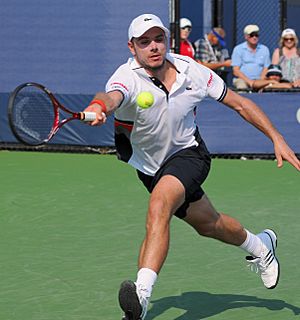 Stanislas Wawrinka at the 2010 US Open

Stanislas "Stan" Wawrinka (born 28 March 1985) is a Swiss professional tennis player. He is also a German citizen because his father is from Germany, though of Czech ancestry. His career-high singles ranking is Number 3 in the world. He reached this rank in January 2014. He considers clay his best surface and his serve and volley his best shot. He won the gold medal for Switzerland in the men's doubles event at the 2008 Summer Olympics in Beijing, with Roger Federer. They beat the Swedish team Simon Aspelin/Thomas Johansson in the final. They also won the 2008 Swiss Team of the Year Award.

All content from Kiddle encyclopedia articles (including the article images and facts) can be freely used under Attribution-ShareAlike license, unless stated otherwise. Cite this article:
Stan Wawrinka Facts for Kids. Kiddle Encyclopedia.