Kei Nishikori' (born 29 December 1989) is a Japanese professional tennis player. He is the only male Japanese tennis player ever to be ranked inside the top 5 in singles, and first reached his career-high singles ranking of world No. 4 in March 2015. He is currently ranked world No. 7 by the Association of Tennis Professionals (ATP).

He has won 11 singles titles and was runner-up at the 2014 US Open, making him the first male player representing an Asian country to reach a Grand Slam singles final. He also became the first man from Asia to qualify for the ATP World Tour Finals and reached the semifinals in 2014 and 2016. In addition, Nishikori defeated Rafael Nadal to win the bronze medal at the 2016 Summer Olympics in Rio de Janeiro. 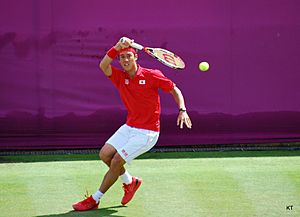 Nishikori at the 2012 Summer Olympics

Nishikori was born in Matsue in Shimane Prefecture, Japan. He began playing tennis at the age of five. He first won the All Japan Tennis Championships for Kids in 2001, and graduated from Aomori-Yamada High School. Nishikori moved to Bradenton, Florida to join the IMG Academy in 2004 at 14 years of age.

His pastimes include football, golf, reading, and listening to music. Nishikori was previously coached by Brad Gilbert. Dante Bottini is his current coach since December 2010. Former world No. 2 Michael Chang was added to his coaching team from January 2014.

Nishikori has endorsed the Wilson Wilson Burn 95. He wears Uniqlo clothing and as of the beginning of 2017 red Nike Vapor Tour shoes after having played for almost a decade in Adidas. 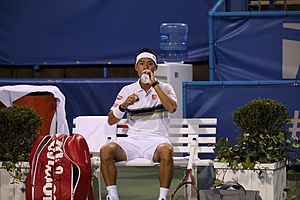 He is often seen wearing a Cup Noodles badge on his sleeve during matches. In 2011, he filmed a commercial for Morinaga & Company's sports drink. He also carries around a character called Mr. Saturn from the popular video game Mother / Earthbound.

All content from Kiddle encyclopedia articles (including the article images and facts) can be freely used under Attribution-ShareAlike license, unless stated otherwise. Cite this article:
Kei Nishikori Facts for Kids. Kiddle Encyclopedia.