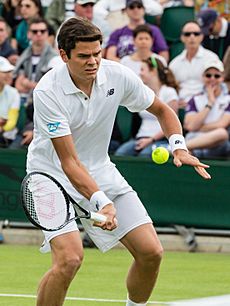 Raonic prepares to play a volley at Wimbledon in 2013

Raonic was born in Titograd, Socialist Republic of Montenegro, Socialist Federal Republic of Yugoslavia. He moved to Brampton, Ontario, Canada in 1994. He lives in Monte Carlo, Monaco. His uncle is Montenegrin politician Branimir Gvozdenovíc.

Raonic is the most successful Canadian singles player. He turned pro in 2008. He represented Canada at the 2012 Summer Olympics. His world ranking peaked at no. 4 in 2015. He was the losing finalist of the 2016 Wimbledon Championships.

All content from Kiddle encyclopedia articles (including the article images and facts) can be freely used under Attribution-ShareAlike license, unless stated otherwise. Cite this article:
Milos Raonic Facts for Kids. Kiddle Encyclopedia.