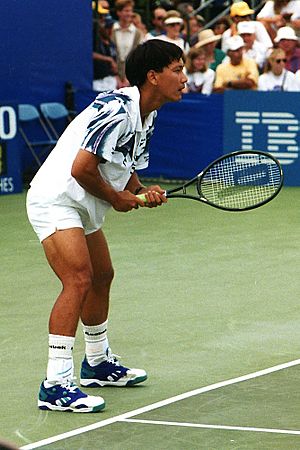 Michael Te-Pei Chang (Chinese: 張德培; pinyin: Zhāng Dépéi; born February 22, 1972) is an American retired tennis player. He was the youngest-ever male winner of a Grand Slam singles title. Michael Chang did this when he won the French Open in 1989 at the age of 17.

Chang was often in the Top 10 in the Association of Tennis Professionals world rankings for several years in the 1990s. His highest ranking (that is, the order in which it is shown how good he is in the sport at a certain time) was World No. 2.

When he won the French Open in 1989, Chang had a well known semi-final match with Ivan Lendl. Before the match, most people thought Chang would lose because he was unseeded, and Lendl was ranked No. 1. At first Chang was losing, but he won the important third set. Starting then, Chang began to have leg cramps, but won the match through determination. Today, many people remember this game as one of his best matches when the name Michael Chang is mentioned.

Chang was born in Hoboken, New Jersey, United States. His parents are Taiwanese. Chang is a Christian. With his family he started the Chang Family Foundation in 1999 "to introduce the Good News of Jesus Christ to the world".

All content from Kiddle encyclopedia articles (including the article images and facts) can be freely used under Attribution-ShareAlike license, unless stated otherwise. Cite this article:
Michael Chang Facts for Kids. Kiddle Encyclopedia.