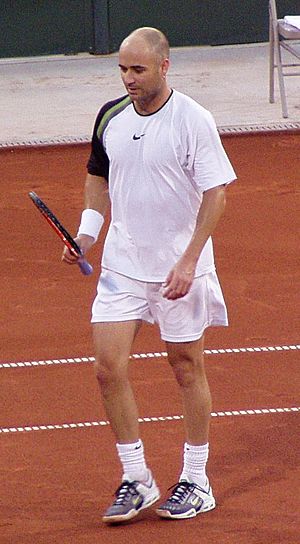 Andre Kirk Agassi (born April 29, 1970) is a retired professional tennis player from the United States. He was the first tennis player to have won all Grand Slam tournaments on four different surfaces. Later, Roger Federer and Rafael Nadal did the same. He is one of the most successful tennis players in history and was formerly ranked number 1 in the world. He is married to former women's number one tennis player Steffi Graf.

All content from Kiddle encyclopedia articles (including the article images and facts) can be freely used under Attribution-ShareAlike license, unless stated otherwise. Cite this article:
Andre Agassi Facts for Kids. Kiddle Encyclopedia.