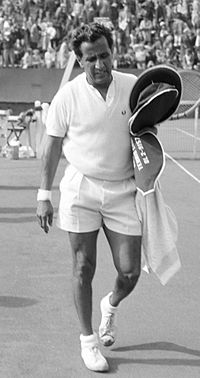 In later years, Segura became a tennis coach and was known for coaching Jimmy Connors.

Segura died on November 18, 2017 at the age of 96 at his home in Carlsbad, California from complications of Parkinson's disease.

All content from Kiddle encyclopedia articles (including the article images and facts) can be freely used under Attribution-ShareAlike license, unless stated otherwise. Cite this article:
Pancho Segura Facts for Kids. Kiddle Encyclopedia.