Doris Day (born Doris Mary Ann Kappelhoff; April 3, 1922 – May 13, 2019) was an American singer, actress, and animal welfare activist. All her grandparents were German immigrants. She was known for her blonde, wholesome image. 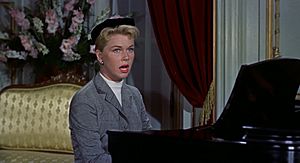 The Man Who Knew Too Much trailer screenshot Doris Day Que Sera, Sera

She sang with the big bands. She started with Les Brown & His Band of Renown. Her first hit song was Sentimental Journey. This song was popular with soldiers returning from World War 2.

She sang in many of her films.

Day starred in Alfred Hitchcock's suspense film, The Man Who Knew Too Much (1956) with James Stewart. She sang two songs in the film, "Que Sera, Sera (Whatever Will Be, Will Be)", which won an Academy Award for Best Original Song, and "We'll Love Again".

In 2011, she released her 29th studio album, My Heart, which contained new material and became a UK Top 10 album. Day received the Grammy Lifetime Achievement Award and a Legend Award from the Society of Singers. 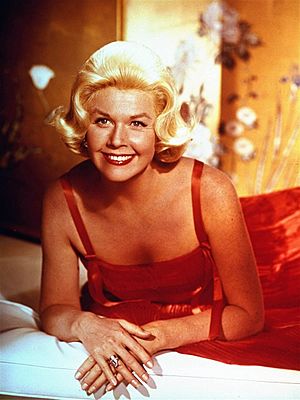 Day's film career began during the latter part of the Classical Hollywood era with the film Romance on the High Seas (1948), ultimately leading to her twenty-year career as a motion picture actress. She starred in films of many genres, including musicals, comedies, and dramas. She played the title role in Calamity Jane (1953), and starred in Alfred Hitchcock's The Man Who Knew Too Much (1956) with James Stewart. Day's most best-known films are those in which she co-stared with Rock Hudson, chief among them 1959's Pillow Talk. She also worked with James Garner on Move Over, Darling (1963) and co-starred with such leading men as Clark Gable, Cary Grant, James Stewart, David Niven, and Rod Taylor. After her final film in 1968, Day starred in the sitcom The Doris Day Show (1968–1973).

Day became the biggest female film star in the early 1960s; through 2012, she was one of only eight performers to be the top box-office earner four times. In 1960, she was nominated for the Academy Award for Best Actress, and in 1989 was given the Cecil B. DeMille Award for lifetime achievement in motion pictures.

After her retirement from films, Day lived in Carmel-by-the-Sea, California. She had many pets and adopted stray animals.

Day was a lifelong Republican. Her only child, music producer and songwriter Terry Melcher, who had a hit in the 1960s with "Hey Little Cobra" under the name The Rip Chords, died of melanoma in November 2004. Day owned a hotel in Carmel-by-the-Sea, the Cypress Inn, which she co-owned with her son. Terry had a son named Ryan with his second wife Jacqueline Carlin. Ryan is a luxury real estate agent living and working in Carmel.

In 2004, she was awarded the Presidential Medal of Freedom; this was followed in 2011 by the Los Angeles Film Critics Association's Career Achievement Award.

Day was married four times. She was married to Al Jorden, a trombonist whom she first met in Barney Rapp's Band, from March 1941 to February 1943. Her only child, son Terrence Paul Jorden (later known as Terry Melcher), resulted from this marriage; he died in 2004.

Her second marriage was to George William Weidler, a saxophonist and the brother of actress Virginia Weidler, from March 30, 1946, to May 31, 1949. Weidler and Day met again several years later; during a brief reconciliation, he introduced her to Christian Science.

On April 3, 1951, her 29th birthday, she married Martin Melcher. This marriage lasted until Melcher's death in April 1968. Melcher adopted Day's son Terry, who, with the name Terry Melcher, became a successful musician and record producer. Martin Melcher produced many of Day's movies. She and Melcher were both practicing Christian Scientists, resulting in her not seeing a doctor for some time after symptoms that suggested cancer. This distressing period ended when, finally consulting a physician, and thereby finding the lump was benign, she fully recovered.

Day's fourth marriage, from April 14, 1976, until April 2, 1982, was to Barry Comden (1935–2009). Comden was the maître d'hôtel at one of Day's favorite restaurants. Knowing of her great love of dogs, Comden endeared himself to Day by giving her a bag of meat scraps and bones on her way out of the restaurant. When this marriage unraveled, Comden complained that Day cared more for her "animal friends" than she did for him.

Day died on May 13, 2019, after contracting pneumonia. Her death was announced by her charity, the Doris Day Animal Foundation. Per Day's requests, the Foundation announced that there would be no funeral services, gravesites, or other public memorials. 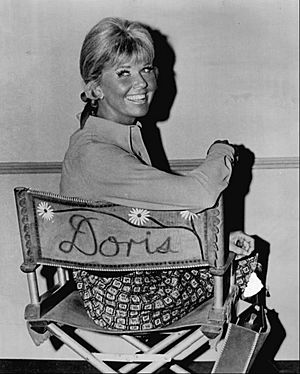 Day's interest in animal welfare and related issues apparently dates to her teen years. While recovering from an automobile accident, she took her dog Tiny for a walk without a leash. Tiny ran into the street and was killed by a passing car. Day later expressed guilt and loneliness about Tiny's untimely death. In 1971, she co-founded Actors and Others for Animals, and appeared in a series of newspaper advertisements denouncing the wearing of fur, alongside Mary Tyler Moore, Angie Dickinson, and Jayne Meadows.

In 1978, Day founded the Doris Day Pet Foundation, now the Doris Day Animal Foundation (DDAF). A non-profit 501(c)(3) grant-giving public charity, DDAF funds other non-profit causes throughout the US that share DDAF's mission of helping animals and the people who love them. The DDAF continues to operate independently.

To complement the Doris Day Animal Foundation, Day formed the Doris Day Animal League (DDAL) in 1987, a national non-profit citizen's lobbying organization whose mission is to reduce pain and suffering and protect animals through legislative initiatives. Day actively lobbied the United States Congress in support of legislation designed to safeguard animal welfare on a number of occasions and in 1995 she originated the annual Spay Day USA. The DDAL merged into The Humane Society of the United States (HSUS) in 2006. The HSUS now manages World Spay Day, the annual one-day spay/neuter event that Day originated.

A facility to help abused and neglected horses opened in 2011 and bears her name—the Doris Day Horse Rescue and Adoption Center, located in Murchison, Texas, on the grounds of an animal sanctuary started by her late friend, author Cleveland Amory. Day contributed $250,000 towards the founding of the center.

Day was a vegetarian.

All content from Kiddle encyclopedia articles (including the article images and facts) can be freely used under Attribution-ShareAlike license, unless stated otherwise. Cite this article:
Doris Day Facts for Kids. Kiddle Encyclopedia.