Henry John Deutschendorf Jr. (December 31, 1943 – October 12, 1997), known professionally as John Denver, was an American singer-songwriter, record producer, actor, activist, and humanitarian, whose greatest commercial success was as a solo singer. After traveling and living in numerous locations while growing up in his military family, Denver began his music career with folk music groups during the late 1960s. Starting in the 1970s, he was one of the most popular acoustic artists of the decade and one of its best-selling artists. By 1974, he was firmly established as one of America's best-selling performers, and AllMusic has described Denver as "among the most beloved entertainers of his era".

Denver recorded and released approximately 300 songs, about 200 of which he composed, with total sales of over 33 million records worldwide. He recorded and performed primarily with an acoustic guitar and sang about his joy in nature, his dislike for city life, his enthusiasm for music, and his relationship trials. Denver's music appeared on a variety of charts, including country music, the Billboard Hot 100, and adult contemporary, in all earning him twelve gold and four platinum albums with his signature songs "Take Me Home, Country Roads", "Annie's Song", "Rocky Mountain High", "Calypso", "Thank God I'm a Country Boy", and "Sunshine on My Shoulders".

Denver appeared in several films and television specials during the 1970s and 1980s. He continued to record in the 1990s, also focusing on environmental issues by lending vocal support to space exploration and testifying in front of Congress in protest against censorship in music. He lived in Aspen, Colorado, for much of his life and was known for his love of Colorado, which he sang about numerous times. In 1974, Denver was named poet laureate of the state. The Colorado state legislature also adopted "Rocky Mountain High" as one of its two state songs in 2007.

Denver was an avid pilot who died aged 53 in a single-fatality crash while flying his experimental Rutan Long-EZ canard aircraft.

John Denver's 1910 Gibson F-hole old guitar - This guitar was the first Denver ever owned, it given to him by his grandmother when he was twelve years old. It sparked Denver’s interest in music and was the beginning for his extremely successful musical career

Because Denver's father was in the military and his family moved often. While the family was stationed at Davis-Monthan AFB in Tucson, Arizona, Denver was a member of the Tucson Arizona Boys Chorus for two years. Denver was happy living in Tucson, but his father was then transferred to Maxwell AFB in Montgomery, Alabama, then in the midst of the Montgomery boycotts. The family later moved to Carswell AFB in Fort Worth, Texas, where Denver graduated from Arlington Heights High School.

At the age of 11, Denver received an acoustic guitar from his grandmother. He learned to play well enough to perform at local clubs by the time he was in college. He adopted the surname "Denver" after the capital of his favorite state, Colorado. Denver studied Architecture at Texas Tech University in Lubbock, and sang in a folk-music group called "The Alpine Trio" while pursuing architectural studies.

Denver dropped out of the Texas Tech School of Engineering in 1963, and moved to Los Angeles, where he sang in folk clubs. In 1965, Denver joined The Mitchell Trio, which later became "Denver, Boise, and Johnson" (John Denver, David Boise, and Michael Johnson). In 1969, Denver abandoned the band life to pursue a solo career and released his first album for RCA Records: Rhymes & Reasons. Denver recorded two more albums in 1970, Take Me to Tomorrow and Whose Garden Was This. 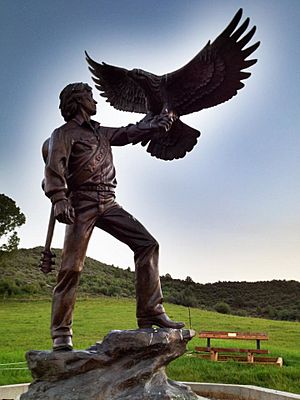 Denver had a few more U.S. Top 30 hits as the 1970s ended, but nothing to match his earlier success. He began to focus more on humanitarian and sustainability causes, focusing extensively on conservation projects. He founded the environmental group Plant-It 2020 (originally Plant-It 2000). Denver had a keen interest in solutions to world hunger. He visited Africa during the 1980s to witness first-hand the suffering caused by starvation and to work with African leaders toward solutions.

In 1983 and 1984, Denver hosted the annual Grammy Awards. In the 1983 finale, Denver was joined on stage by folk music legend Joan Baez with whom he led an all-star version of "Blowin' in the Wind" and "Let The Sunshine In," joined by such diverse musical icons as Jennifer Warnes, Donna Summer, and Rick James.

In 1984, Roone Arledge, president of ABC Sports, asked Denver to compose and sing the theme song for the 1984 Winter Olympics in Sarajevo. Denver worked as both a performer and a skiing commentator. (Skiing was another avocation of Denver's.) He had written and composed "The Gold and Beyond," and he sang it for the Olympic Games athletes, as well as local venues including many schools.

For Earth Day 1990, Denver was the on-camera narrator of a well-received environmental TV program, In Partnership With Earth, with then–EPA Administrator William K. Reilly.

Due to his love of flying, he was attracted to NASA and became dedicated to America's work in outer space. He conscientiously worked to help bring into being the "Citizens in Space" program. Denver received the NASA Public Service Medal, in 1985 for "helping to increase awareness of space exploration by the peoples of the world," an award usually restricted to spaceflight engineers and designers.

Also, in 1985, Denver passed NASA's rigorous physical exam and was in line for a space flight, a finalist for the first citizen's trip on the Space Shuttle in 1986, but he was not chosen. After the Space Shuttle Challenger disaster with teacher Christa McAuliffe aboard, Denver dedicated his song "Flying for Me" to all astronauts, and he continued to support NASA. 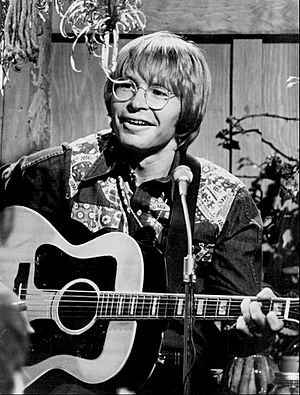 Denver testified before the Senate Labor and Commerce Committee on the topic of censorship during a Parents Music Resource Center hearing in 1985. Denver also toured Russia in 1985. His 11 Soviet Union concerts were the first by any American artist in more than 10 years, and they marked a very important cultural exchange that culminated in an agreement to allow other western artists to perform there. He returned two years later to perform at a benefit concert for the victims of the Chernobyl disaster.

In October 1992, Denver undertook a multiple-city tour of the People's Republic of China. He also released a greatest-hits CD, Homegrown, to raise money for homeless charities. In 1996, he was inducted into the Songwriters Hall of Fame.

In early 1997, Denver filmed an episode for the Nature series, centering on the natural wonders that inspired many of his best-loved songs. His last song, "Yellowstone, Coming Home," which he composed while rafting along the Colorado River with his son and young daughter, is included.

In the summer of 1997, shortly before his death, Denver recorded a children's train album for Sony Wonder, titled All Aboard!. This album won a posthumous Best Musical Album For Children Grammy for Denver, which was his only Grammy. 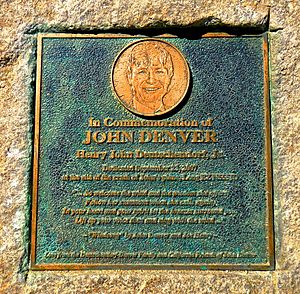 Denver's first marriage was to Anne Martell and they had two children which they adopted. She was the subject of his hit "Annie's Song", which he composed in only ten minutes as he sat on a Colorado ski lift. They lived in Edina, Minnesota, from 1968 to 1971. Following the success of "Rocky Mountain High", inspired by a camping trip with Anne and some friends, Denver purchased a residence in Aspen, Colorado. Denver and Martell divorced in 1982.

Denver married Australian actress Cassandra Delaney in 1988, after a two-year courtship. Settling at Denver's home in Aspen, the couple had a daughter, Jesse Belle. Denver and Delaney divorced in 1993.

Denver's talent extended beyond music. Artistic interests included painting, but because of his limiting schedule he pursued photography. Denver was also an avid skier and golfer, but his principal interest was in flying. His love of flying was second only to his love of music. In 1974, he bought a Learjet to fly himself to concerts. He was a collector of vintage biplanes, and owned a Christen Eagle aerobatic plane, two Cessna 210 airplanes, and in 1997, an experimental, amateur-built Rutan Long-EZ.

A pilot with over 2,700 hours of experience, Denver had pilot ratings for single-engine land and sea, multi-engine land, glider, and instrument. 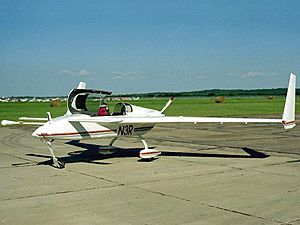 Denver was killed on October 12, 1997 when his experimental Rutan Long-EZ plane, aircraft registration number N555JD, crashed into Monterey Bay near Pacific Grove, California. Denver was the only occupant of the aircraft. Post-accident investigation by the NTSB showed that the leading cause of the accident was Denver's inability to switch fuel tanks during flight and his subsequent loss of control, while attempting to switch them.

Upon announcement of Denver's death, Colorado governor Roy Romer ordered all state flags to be lowered to half-staff in his honor. Funeral services were held at Faith Presbyterian Church in Aurora, Colorado, on October 17, 1997, officiated by Pastor Les Felker, a retired Air Force chaplain, following which Denver's remains were cremated and his ashes were scattered in the Rocky Mountains. Further tributes were made at the following Grammys and Country Music Association Awards. 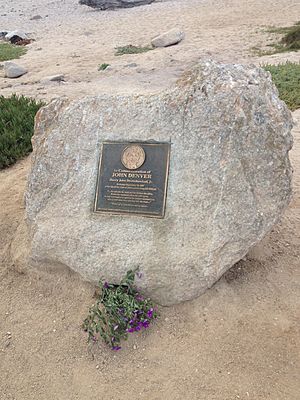 The plaque marking the location of Denver's plane crash in Pacific Grove, California

In September 2007, nearly ten years after Denver's death, his brother Ron witnessed the dedication of a plaque placed near the crash site in Pacific Grove, California, commemorating the singer.

Denver's music remains popular around the world. Previously unreleased and unnoticed recordings are now sought-after collectibles in pop, folk and country genres. Also in demand are copies of Denver's many television appearances, especially his one-hour specials from the 1970s and his six-part series for Britain's BBC, The John Denver Show.

To mark the 10th anniversary of Denver's death, his family released a set of previously unreleased recordings of Denver's 1985 concert performances in the Soviet Union. This two-CD set, John Denver – Live in the USSR, was produced by Denver's friend Roger Nichols, and released by AAO Music. These digital recordings were made during 11 concerts and then rediscovered in 2002. Included in this set is a previously unpublished rendition of "Annie's Song" in Russian. The collection was released November 6, 2007.

On October 13, 2009, a DVD box set of previously unreleased concerts recorded throughout Denver's career was released by Eagle Rock Entertainment. Around the World Live is a 5-disc DVD set featuring three complete live performances with full band from Australia in 1977, Japan in 1981, and England in 1986.

On April 21, 2011, Denver became the first inductee into the Colorado Music Hall of Fame. A benefit concert was held at Broomfield's 1st Bank Center and hosted by Olivia Newton-John. Other performers participating in the event included Nitty Gritty Dirt Band, Lee Ann Womack, and John Oates. Both of his ex-wives were in attendance, and the award was presented to his three children. 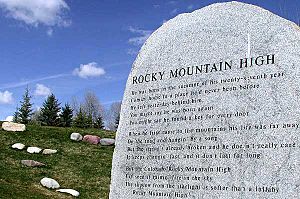 The John Denver "Spirit" statue is a 2002 bronze sculpture statue by artist Sue DiCicco that was financed by Denver's fans. It is located at the Colorado Music Hall of Fame at Red Rocks.

On March 7, 2014, the West Virginia Legislature approved a resolution to make "Take Me Home, Country Roads" the official state song of West Virginia. Governor Earl Ray Tomblin signed the resolution into law on March 8. Denver thus shares the distinction with the father of American music, Stephen Foster as the composer of two state songs.

On October 24, 2014, Denver was awarded a star on the Hollywood Walk of Fame in Hollywood, California, which was accepted by his children Zachary and Jesse. His star is located at 7065 Hollywood Boulevard. 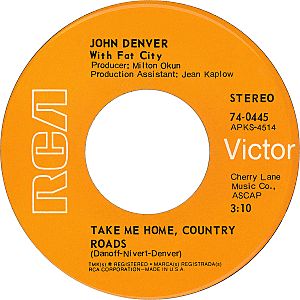 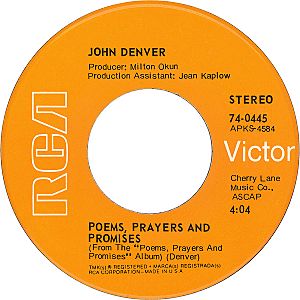 All content from Kiddle encyclopedia articles (including the article images and facts) can be freely used under Attribution-ShareAlike license, unless stated otherwise. Cite this article:
John Denver Facts for Kids. Kiddle Encyclopedia.