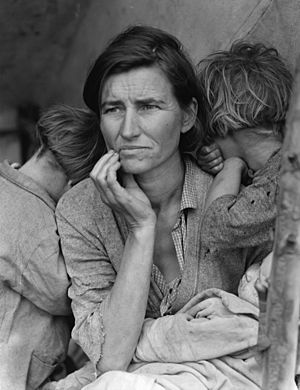 Hunger is the feeling of wanting to eat. The opposite of hunger is called satiety or fullness. The feeling is started in the hypothalamus, and hormones are released from the liver. People can survive weeks without eating, but they will start to feel hungry after they have not eaten for a few hours. Hunger is generally considered quite uncomfortable. People who have eaten food usually will feel less hungry, or not hungry at all. People can live longer without food than without water.

Hunger is also used to refer to people who generally have little to eat, and are therefore often hungry.

All content from Kiddle encyclopedia articles (including the article images and facts) can be freely used under Attribution-ShareAlike license, unless stated otherwise. Cite this article:
Hunger Facts for Kids. Kiddle Encyclopedia.